Satchmo, Antony & Cleopatra + "Me" in Playbill 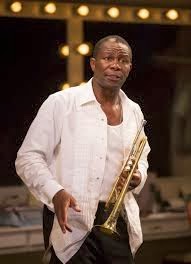 Two shows have recently opened that I’d like to talk about but don’t feel as though I should since I’ve a rooting interest in each. The first is Satchmo at the Waldorf, a one-man (but multi-character) bioplay about Louis Armstrong that was written by Terry Teachout and stars John Douglas Thompson as both the iconic black jazzman and his longtime (and mob connected) white manager Joe Glaser.

Some of you may recognize Terry’s name because he’s the theater critic for the Wall Street Journal and others may know him as the author of “Pops,” a biography about Armstrong, but Terry also happens to be an old pal of mine and so I’m going to recuse myself from a formal review.


But I think it’s OK to say that the word of mouth on his show (and Thompson's performance) has been good ever since Satchmo debuted in Orlando, Fla. three years ago and straight through its subsequent productions at Shakespeare & Company in Lenox, Mass, the Long Wharf Theatre in New Haven and the Wilma Theater in Philadelphia.  You can see it, and judge for yourself, at the Westside Theatre, where the show recently opened for an unlimited run. 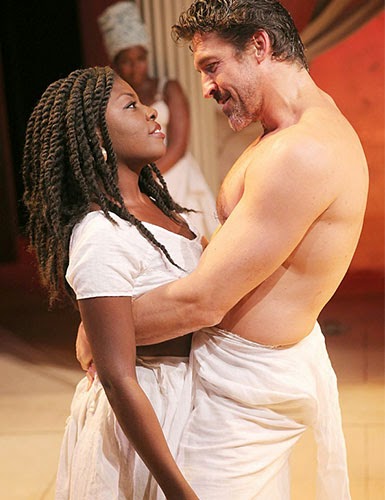 The second I-probably-shouldn’t-talk-about-it show is Antony and Cleopatra, which is running in The Public Theater’s Anspacher space through March 23.  It, of course, is by William Shakespeare, whom I don’t know personally.  But I have written a profile of Tarell Alvin McCraney, who has done what he calls a radical edit of the play, trimming about an hour from its usual three-and-a-half hour running time.

McCraney, who has also directed the production, has set the romance between the Roman general (played by Jonathan Cake) and the Egyptian queen (played by Joaquina Kalukango) in 18th century Haiti, just before black slaves overthrew their French masters, and filled it with island music and invocations of voodoo.

My story on McCraney is running all month in the current issue of Playbill, fulfilling a childhood dream of mine to write for that publication. You can also read the piece by clicking here.

Labels: Antony and Cleopatra, Satchmo at the Waldorf