The Highly Theatrical Hijinks of "Vanity Fair," "The Play That Goes Wrong" and "946: The Amazing Story of Adolphus Tips" 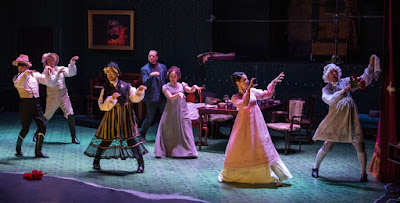 Sometimes you want a little sizzle with your theatrical steak. Or at least I do.  Which is why I'm such a fan of shows that take an imaginative approach to their storytelling, using all kinds of stagecraft from masks and puppets to having actors break out in stylized choreography or engage in loopy physical comedy. But it can be tricky to blend all of those elements into a fully satisfying evening in the theater and three shows I recently saw succeeded only in varying degrees:

Vanity Fair:  Last year, the Bedlam theater company wowed audiences (and me) with a rollicking adaptation of Jane Austen's "Sense & Sensibility." So I jumped at the chance to see what the same team of playwright Kate Hamill and director Eric Tucker would do with William Makepeace Thackeray's classic tale about the poor but upwardly mobile Becky Sharp and her genteel friend Amelia. But the first act is filled with so much razzle-dazzle—frequent forays into the audience, Monty Pythonesque slapstick, dance interludes set to Michael Jackson's "Thriller" and Beyoncé's "Single Ladies (Put a Ring on It)"—that it nearly overwhelms the story.

Luckily, things settle down a bit in the second act, refocusing the spotlight on the limited options open to early 19th century women and to the adroit skills of the production's seven-member cast, most of whom play multiple characters with little regard for gender, age or ethnicity. The ultimately worth-seeing production, which is playing at the Pearl Theatre Co.'s Peter Norton Space, is scheduled to run through May 14.

The Play That Goes Wrong: The Brits seem to excel at this kind of playful playmaking and the aptly named Mischief Theatre goes for broke with this antic farce about an amateur theater company that can't do anything right. The Play That Goes Wrong was conceived by company members Henry Lewis, Jonathan Sayer and Henry Shields, who seem to have nothing more on their minds than delivering a good time—and they take every opportunity to do so.

Funny faux credits for their play-within-a-play "The Murder at Haversham Manor" are listed inside the real Playbill. Onstage, cues are intentionally missed, sets collapse and actors perform pratfalls and spit takes with such manic abandon that I feared they might hurt themselves. The entire cast, under Mark Bell's exquisitely calibrated direction, is superb. Still, Dave Hearn, as a toothy scene-stealing ham, steals every scene he's in.

I'm not usually that high on lowbrow comedy and this one goes on about half an hour longer than it should but I couldn't stop laughing at this show, which I suspect will appeal to people of all ages and humor inclinations. The production is already packing them in at the Lyceum Theatre, where it's currently scheduled to run until Labor Day.

946: The Amazing Story of Adolphus Tips. Few companies are as adept at magical show making as Britain's Kneehigh Theatre, which has been a frequent visitor to St. Ann's Warehouse over the last few years with such gorgeous productions as Tristan and Yseult and Brief Encounter. This year, Kneehigh brought over a show based on a children's book by Michael Morpurgo, the author of "War Horse." While that book, and the resulting Tony-winning show, centered on a boy trying to find his horse during World War I, the central character in 946 is a girl named Lily, who loses her cat when her family is forced to evacuate their village during World War II.

But the true heart of this story rests with the way African-American soldiers were treated during that war. Adi, a young black soldier who befriends Lily and helps look for her cat, is one of the soldiers assigned to rehearse for the Normandy invasion; 946 is the number of the men killed when that real-life military exercise went tragically awry.

Emma Rice, Kneehigh's former artistic director, adapted the book with Morpurgo and directed the production, which ended its limited run this past weekend. She embellished it with bluesy songs and Lindy-Hopping dance numbers, both accompanied by an onstage jazz band. And there were other bits of theater business, including puppets and simulated battle scenes in which tiny toy ships floated in big tubs of water. But the show never achieved the wonder of War Horse. And this time out, all the clever stagecraft undermined the emotional gut punch of the deaths of the men it sought to honor.