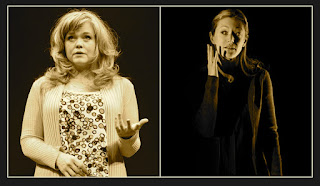 Mass shootings are now so commonplace that they've spawned a whole subgenre of theater. Over the past decade I've seen The Columbine Project and The Library, both based on the 1999 massacre at a Colorado high school;The Amish Project about the slaughter of five girls in a Pennsylvania schoolhouse in 2006; The Events, inspired by the 2011 massacre of 77 people at a summer camp in Norway; plus every office worker's nightmare Gloria. And just this past week, I added two more entries to this list of requiems: When It's You and On the Exhale.

Any show that takes on this topic has to walk a narrow line, paying homage to the pain the real-life tragedies caused without exploiting them and attempting to provided insight into the incomprehensible. The Keen Company's production of When It's You, which is playing at the Clurman Theatre in Theatre Row through April 8, fails to meet both tests.

A one-woman show, written by Courtney Baron, a member of Keen's development program for playwrights (click here to read an interview with her) and directed by Keen's artistic director Jonathan Silverstein, it purports to look at one of these incidents through the eyes of a 37-year-old woman named Ginnifer who long ago dated the man who shoots 10 people in a parking lot.

Instead, the show is actually a solipsistic monologue about a woman who can't get her own life together. "I'm not here to talk about Jason Hanley," she tells the audience. And she means it.

The play attempts to add some tension by having her say that everyone keeps asking her about Jason. But Ginnifer's agonizing over what she might have done to prevent the killings seems like a neurotic attempt to push her way into the spotlight that surrounds the traumatic event.

Even that might have made a good story about the obsession society has with fame of any ilk but Baron undercuts it with ramblings about Ginnefer's dying mother and her inability to find love or have a family of her own.

The character actress Ana Reeder does what she can with the part but it's thin gruel and the 70 minutes it took for her to get through it seemed endless.

On the Exhale, running in the Roundabout Theatre Company's tiny Black Box Theatre through April 2, is a one-woman show too but it ties its character directly to a tragedy that evokes the Sandy Hook Elementary School shooting in which 20 first-graders were killed in 2014. The effect is far more powerful.

Playwright Martín Zimmerman's unnamed protagonist is a college professor and a single mom whose son was conceived by artificial insemination and is the center of her world. The 60-minute play tracks the stages of her grief when he is killed in a school shooting (click here to listen to an interview with the author).

As she ricochets from seeking comfort by lobbying with other grieving parents for gun control to seeking revenge by learning how to shoot herself, the play reminded me of "The Year of Magical Thinking," Joan Didion's marvelous book and play about the near surreal year she had after the loss of her husband.

The mother in On the Exhale is played by the brilliant Marin Ireland, who, under Leigh Silverman's delicate direction, has never been better. Which is saying a lot for an actress who has brought intelligence and immediacy to roles ranging from the insulted girlfriend in Neil LaBute's Reasons to be Pretty to a scene-stealing domestic terrorist in TV's "Homeland" (click here to read an interview with the actress).

Standing on a bare stage sensitively lit by Jen Shriever and speaking directly to the audience, Ireland so persuasively conveys the mother's grief that there were moments when I literally shook with the sorrow and the rage that having a beloved so savagely ripped away would arouse.

It's not that I didn't know intellectually what the horror of such an experience might be but On the Exhale made me feel it, which is what good theater should do.

Labels: On the Exhale, When It's You