"The Skin of Our Teeth" is Wacky—but Wise 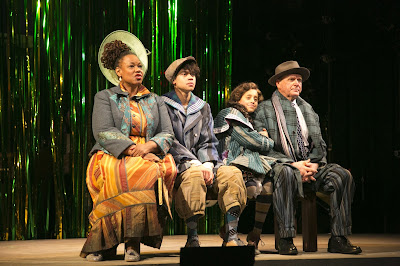 Thornton Wilder's The Skin of Our Teeth premiered in 1942, just 10 months after the attack on Pearl Harbor launched the U.S. into World War II. Clearly tapping into the zeitgeist of the moment, Wilder's mediation on humankind's ability to survive upheavals from prehistoric times to the then-present ran for 359 performances and won the Pulitzer Prize for Drama.

But no subsequent New York production has lasted even a month; the 1975 Broadway revival barely made a week and people tend to shake their heads mournfully whenever anyone mentions the Public Theater's 1998 incarnation at Central Park's Delacorte Theater.

Still, the show has its partisans, including my theatergoing buddy Bill, who played the lead in his high school production and pushed for us to see the ambitious Theater for A New Audience revival that's running at the Polonsky Shakespeare Center in Brooklyn through March 19.

What we saw was as wacky as Wilder intended it to be. The play famously follows the travails of the Antrobus family (their name is a play on the Greek word for human) which includes father George, mother Maggie, their two children Henry and Gladys and the family's cheeky maid Sabina.

George's success as the inventor of such marvels as the wheel and the alphabet has allowed them to live in a comfortable home in New Jersey but as the plays opens, the Ice Age has begun and the family has to decide whether to give shelter to the increasing number of refugees who are showing up at their door and seeking to escape the cold.

In Act 2, a fortune teller predicts a great flood and watches as the Antrobus clan and a procession of animals seek refuge in an ark-style boat. The final act finds the family members struggling to survive a war that has ravaged their home and relationships.

It's all presented in a meta-theatrical package in which the fourth wall is broken when Sabina talks to the audience and comments on the action. Meanwhile, evoking Thornton's earlier and more accessible Our Town, a stage manager character occasionally interrupts the proceedings with instructions and announcements.

Director Arin Arbus commits totally to the play's deliberate absurdities and adds a few innovations of her own, updating the play's pop culture references and underscoring Wilder's point that the Antrobuses represent all of us by casting actors of differing ethnicities to play the family members.

Stage vet David Rasche, who's white, lends his customary authority to George and the stage-commanding Kecia Lewis, who's black, plays Maggie, while the children are played by Kimber Monroe and Reynaldo Piniella. 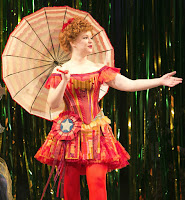 Mary Wiseman, a recent Juilliard graduate who calls to mind the delightful zaniness of the young Faith Prince, gives a breakout performance as Sabina, the role that won Tallulah Bankhead a New York Drama Critics Award when she originated it.

Backing up those main characters is a 30-member ensemble who play the Ice Age refugees, the war exiles and the Noah's Ark animals. All of them, including a couple of dinosaurs, are wittily costumed by Cait O'Connor, fill Riccardo Hernandez's origami-style set and perform Sonya Tayeh's incidental choreography.

Arbus also commissioned composer César Alvarez to write three songs for the production, including a we're-all-in-this-together choral number sung by the entire cast.

In short, there's a lot going on. Some of it overwhelms the storyline (I preferred the quiet moments like the one between father and son in Act 3). But, like its characters, Wilder's play is resilient and its belief that humanity has survived all kinds of challenges in the past and so will be able to get through bad times again manages to shine through.

Some folks, including Bill, were moved by that message, finding it particularly relevant in our own uncertain times. As for me, I just hope that Wilder's optimistic outlook still holds.

Labels: The Skin of Our Teeth