"Bull in a China Shop" Marks a Breakthrough 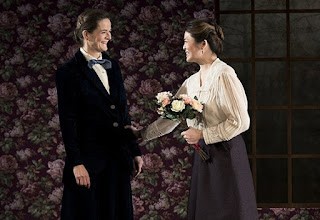 Bull in a China Shop is a flawed play and yet I want to commend LCT3 for putting it on. For this is just the kind of show that a theater devoted to nurturing new artists should be doing. The production marks the professional debut of Bryna Turner, a clearly talented young playwright who deserves this chance to see her work up on its feet so that her next time out she can make something even better.

The titular bull in her current play is Mary Woolley, who served as president of Mount Holyoke College from 1900 to 1937 and transformed the place from a finishing school for rich girls into a top academic institution that rivaled the best men's colleges.

The play is based on Woolley's letters with Jeannette Marks, an English professor and the love of her life for 55 years. It tracks the ups and downs of their relationship (although refreshingly, neither has any angst about being gay,) their struggles to improve the college and their roles in the feminist movement and the battle to get women the right to vote.

It's all fascinating stuff. But it's also too much. Bull in a China Shop might have worked better if, instead of trying to squeeze the full arc of Woolley's life into 90 minutes, Turner had followed the current trend in biopics like "Jackie" and "Snowden" and focused on a particular moment in Woolley's life that revealed the essence of who this remarkable woman was.

Turner attempts to patch over the weak spots by making the women's attitudes contemporary and their language colloquial but that ends up relying too heavily on a barrage of f-bombs.

Other shows have taken a similar approach, including last year's wonderful Men on Boats (click here for my review of that) but they found ways to make those actions flow naturally from their characters. Here, it seems imposed on them: women like Woolley and Marks might have cursed when truly vexed but I doubt it would have been their habitual style of speaking.

And although the women wear historically appropriate outfits (beautifully designed by Oana Botez) director Lee Sunday Evans has also taken a contemporary approach with the staging (click here to read about themaking of this production).

Characters break the fourth wall. Actors of color, including Ruibo Qian who plays Marks, are anachronistically cast as professors and students at Mount Holyoke. Qian and Enid Graham, the white actress who makes a commanding Woolley, strip off their corsets for intimate lovemaking scenes.

Most of the action unfolds in a sparsely-furnished unit set that designer Arnulfo Maldonado has decorated with a floral-print wallpaper, whose pattern I'm assuming is significant although you may need a women's studies degree to fully understand what it signifies.

But don't let my quibbles put you off from seeing Bull in a China Shop. Stories that showcase the lives of women, especially gay women, still rarely get told onstage. And, despite her play's flaws, Turner's commitment to telling them should be encouraged.

Besides, I suspect that at some future date you'll be glad for the bragging rights of having seen her first professional production.

Labels: Bull in a China Shop