"The Events" Doesn't Live Up to Its Billing 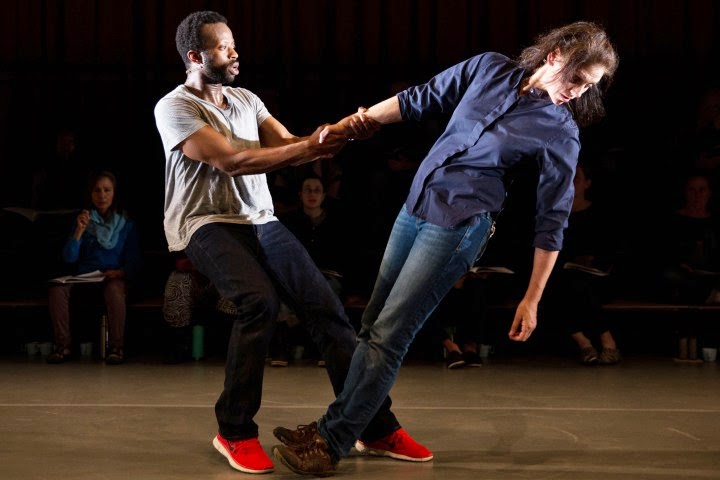 Every show is an event of some kind but The Events, the docudrama now playing at New York Theatre Workshop, promised to be a particularly special one. Inspired by the 2011 massacre of 77 people, most of them young, at a summer camp in Norway, it proposes to look at both the causes of such violent acts and the ways in which their survivors struggle to recover from them.

Playwright David Greig and director Ramin Gray have moved the setting to somewhere in Great Britain but, as the growing list of similar events in this country and abroad have shown, it could be anywhere and far too many of us are in need of solace.

The story here revolves around a female minister who leads a community choir that becomes the target of an assault. She comes face-to-face with the gunman and in that moment is forced to confront both her fear of mortality and her definition of morality.

The only other actor on stage plays a variety of roles, including that of the killer. Which gets confusing since he wears the same T-shirt and jeans throughout and doesn't change his voice or mannerisms to indicate that the different characters are distinct people.

And, like most of us, neither the playwright, director nor actor is successful at getting inside the gunman’s head.  So all we’re left with are the usual clichés: he’s an alienated immigrant, a misguided fundamentalist, a lover of loud music.

In a simultaneous gesture to classical Greek drama and the current rage for participatory theater, Greig and Gray have constructed The Event so that a revolving series of real community choirs are invited to take on the role of the fictional one in the play.

That puts a whole lot of weight on the choice of the choir that’s performing the night you see the show and, alas, the one my friend Johanna and I got wasn’t great.

The choral numbers take up almost a third of the 90-minute show and the choristers are asked to sing a wide variety of songs that include traditional hymns, Norwegian folk songs, pop tunes by artists like the Carpenters and hip-hop by the DJ Dizzee Rascal. Our group was enthusiastic but only intermittently successful.

Some of them were also asked to say, or read, a few lines of dialog. I don’t imagine they get much time to rehearse and, of course, they aren’t pros but only one or two were able to put any life into their lines and a couple, perhaps too thrilled to be in the spotlight, hammed it up to the point that I found myself cringing.

A man sitting in an aisle seat a couple of rows ahead of me must have been even more distressed than I was by all of it because he jumped up and ran out midway through the show.

But judging by some of the comments I’ve seen tweeted and posted on people’s Facebook pages, The Events can be a moving and cathartic experience for lots of people.  I wish I’d been at one of those performances.