"Pocatello" is A Depressing Place to Visit 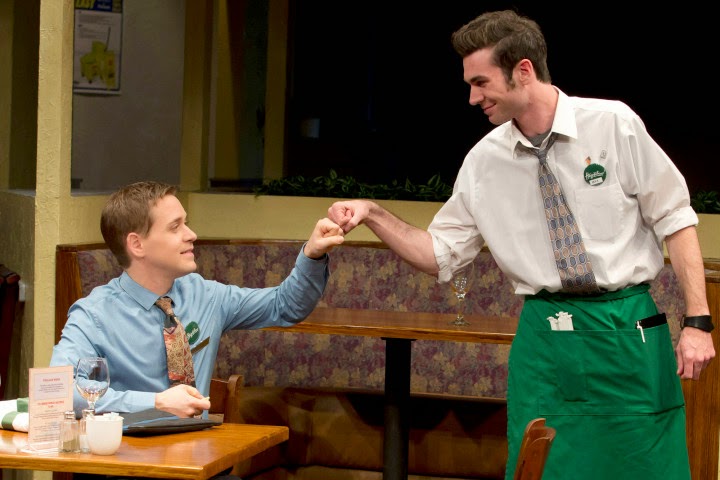 Samuel D. Hunter should be my kind of playwright. The characters he writes about are the blue-collar people that I’m always griping never appear in plays. He takes on the kind of big questions I like about God, goodness, our reason for existence. He wrestles with important contemporary issues like the decline of the middle and working classes. He creates flesh-and-blood characters who grapple with real-life problems and he gives them great stuff to say. And yet Hunter’s plays always seem to turn me off.

I was so turned off by The Whale, his 2012 play about a morbidly obese man, that I had to ask my theatergoing buddy Bill to write the post on it (click here to read why he liked it). Then, earlier this year, I was underwhelmed by The Few, Hunter’s play about lonely truckers and the people who love them (click here for my review of that). And now I find myself shrugging my shoulders at his latest, Pocatello, which is running at Playwrights Horizons through Jan. 4.

Pocatello is set entirely in an unnamed Olive Garden-like restaurant in the titular Idaho city and tells the stories of the various people who work there. The main character is Eddie, the manager of the place, who is mild-mannered and quietly gay (everyone knows that he is but no one talks about it). He is also desperate to keep his failing restaurant going and to bring his fractious family, still mourning the long-ago suicide of Eddie’s dad, back together again.

When the play opens, it is family, or as a banner declares famiglia, week at the restaurant and two unhappy clans have gathered to dine at separate tables in a back dining room. At one are Eddie’s irascible mother and his more successful older brother and sister-in-law who are visiting from Minnesota. At the other are the senile father, bulimic teen daughter and alcoholic wife of Troy, a waiter who started working at the restaurant after the town’s paper mill closed. Serving them are the sexually-liberal Isabelle, who was prematurely orphaned at 12, and Max, a recovering meth addict.

I think that covers just about every major contemporary dysfunction and the character’s various woes—plus a succession of depressing meals—unfold in a series of scenes that take place over three days. The result is one miserable development after another.

Maybe I’ve just been lucky to have had a happier life than Hunter seems to have experienced or to have always lived in big cities instead of small ones like Hunter who grew up in Idaho but there's an uncomfortable S&M quality to the relationship Hunter has with his characters. He seems to relish heaping awful things on them and then allowing them to wallow in it.

All that grimness just gets me down. I didn’t feel empathy or compassion as I sat through the 90 minutes of Pocatello but annoyance. And that ended up annoying me even more because Hunter, a recent McArthur genius grant winner (click here to read a Q&A with him) has some worthy things to say about the rise of the big-box-store economy but it gets lost in the din of all the desperation.

I know that people can get stuck in their own misery (despite “my happier life,” I’ve had my share of head-in-the-sand moments) but Hunter doesn’t make it clear enough why—except to keep the play depressing—Eddie would stick around in a dead-end job in a dying town with a bitter mother and almost no chance at romance. I mean at least there’s a Gay Men’s Chorus in Boise.

But, as usual, the cast rides to the rescue. The acting, under the deft direction of Hunter’s frequent collaborator Davis McCallum, is top-notch in every one of Pocatello's 10 roles. And T.R. Knight is so good and genuine as Eddie that he almost made me want to visit an Olive Garden. Almost.

I caught the last performance on Sunday night and loved this play. T.R. Knight was heartbreaking. I love how Samuel Hunter packed so many themes into this story - youth and aging, anxiety over what's in our food, substance abuse, finding a community - and yet the characters and dialogue felt real.

I understand what you're saying about Eddie but I think he just feels very rooted to Pocatello and maybe still wants to be there for his mother.

Granted, this is a play filled with despair without a ray of hope and usually that's not my thing. But for some reason, I found this absorbing.