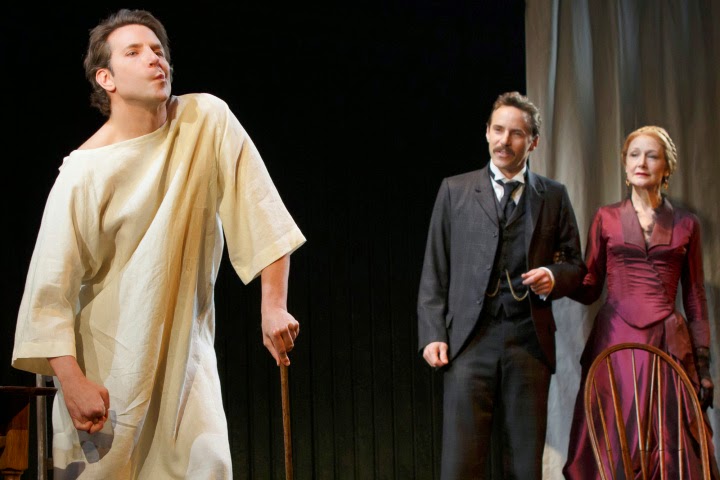 Theater is all about dreams and so it’s nice when one comes true as triumphantly as it does with the revival of The Elephant Man, which opened at the Booth Theatre on Sunday night, fulfilling the lifelong dream of its star Bradley Cooper.

As you probably know, the play dramatizes the real-life story of Joseph Merrick, called John onstage, who was born with such severe physical deformities (a giant forehead, an elephantine right arm, rough and tuberous skin) that he was displayed for a time in Victorian-era freak shows. A doctor named Frederick Treves discovered him at one and brought Merrick to The London Hospital where he became a subject of medical research, a pet cause of the society set and a permanent resident until his death at just age 27.

Playwright Bernard Pomerance transformed Merrick’s story into an examination of what defines a man and he mixed in large helpings of the debate over whether humanity is better served by religion (as represented by the bishop who tries to save Merrick’s soul) or science (embodied in the doctor who focuses on his physical well-being).

The Elephant Man originally opened on Broadway in 1979, won three Tonys, including for Best Play, and ran for over 900 performances. A big-box-office movie with John Hurt as Merrick and Anthony Hopkins as Treves came out the next year. A young Bradley Cooper later saw the movie and was so affected by it that he decided to become an actor and later performed scenes from the play for his master’s thesis at the Actors Studio Drama School.

Over the past 15 years, Cooper has become a Hollywood star, hitting it big at the box office with “The Hangover” comedies, winning Oscar nominations for his roles in “Silver Linings Playbook” and “American Hustle” and being named People magazine’s “Sexiest Man Alive," but his interest in The Elephant Man never waned.  He did the play at the Williamstown Theater Festival in 2012 and now he’s brought it to Broadway (click here to read more about his relationship with the play).

This has the sound of a vanity project but, luckily, it doesn’t play that way. For Cooper gives a sympathetic performance and surrounds himself with a cast of first-rate co-stars. And it’s the acting that provides the emotional through line in director Scott Ellis’ spare production of, let's be honest, a somewhat sketchy play that doesn’t always bother to connect one scene to the next or to bore deep into any of them.

Cooper personally recruited the always-intriguing Patricia Clarkson to play Mrs. Kendal, the actress who becomes the primary woman in Merrick’s life. The real-life Madge Kendal never met Merrick, although she did raise money for his care.  But the character she inspired visits often in the play and her quips provide much of the comic relief.

Unlike her cast mates, Clarkson doesn’t affect a British accent, at least not a sustaining one, but she is dryly funny and, then in Kendal’s final scene with Merrick, very moving (click here to read a profile of her). Meanwhile Alessandro Nivola is outstanding throughout as Treves, a man of science who finds himself inspired by his patient (click here to read about how he put his performance together).

But, of course, people (the average age of the audience the night my theatergoing buddy Bill and I saw the play was at least a decade younger than you typically find on Broadway) are coming to see Cooper. And I doubt they were disappointed.

The role of Merrick is supposed to be performed without prosthetics or heavy makeup. And so Cooper contorts his body and his face to portray the deformities that were so unsightly that nurses reportedly fled at the sight of Merrick. At the same time, he manages to convey the beauty of the inner life that allowed Merrick to create art, write poetry and speculate that “I think my head is so big because it is so full of dreams.”

I can’t honestly say that the play moved me as much as it did others, including Bill, but the look of satisfaction and gratitude on Cooper’s face at the curtain call made it impossible not to celebrate watching his dream come true.