"The Invisible Hand" is a Sure-Handed Thriller 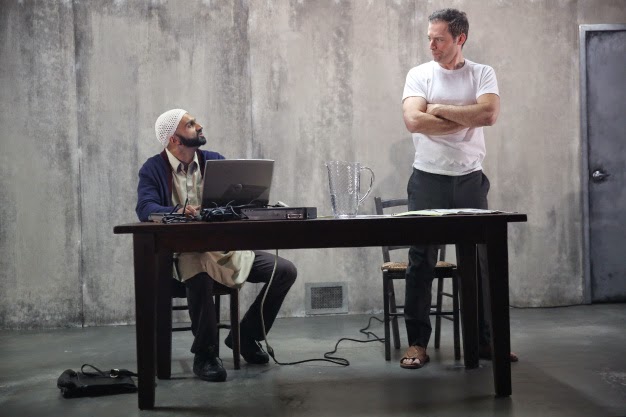 This is turning out to be Ayad Akhtar’s year. Of course last year, when his play Disgraced won the Pulitzer Prize for Drama, wasn’t so bad for him either. But in just the past six months, Akhtar opened The Who & The What, a play about a Pakistani-American family, at Lincoln Center’s Claire Tow Theater, saw Disgraced make its Broadway debut and, on Monday, opened his latest play The Invisible Hand, which is scheduled to run at New York Theatre Workshop through Jan 4.

All three plays deal with the interaction between traditional Islamic values and contemporary life in a post-9/11 world. And no other writer in any medium is exploring this timely and complex issue with more honesty, insight and nuance than Akhtar does.

Not all of it has worked. The Who & The What was more didactic than dramatic in its examination of the role of women in Islam (click here to read my review).  And while I thought the Lincoln Center production of Disgraced was the best thing I saw that year (click here for my review of it) the cast changes have drained some of the energy from the Broadway production. 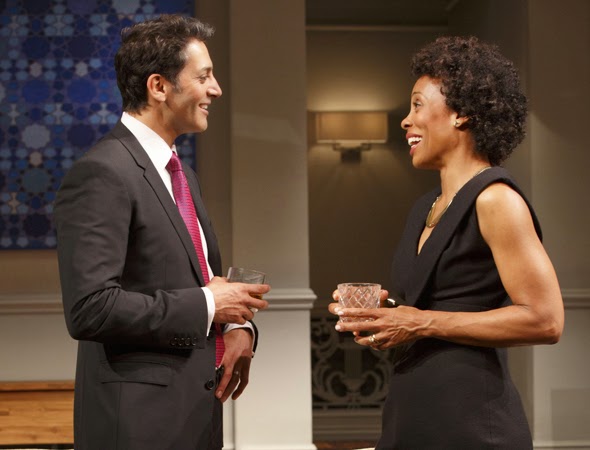 Aasif Mandvi had bristled with the scrappy determination and sublimated anger of the Pakistani-born attorney in the play whose efforts to assimilate into the white world are thwarted after he makes a courtesy call on a jailed Muslim cleric. But the British actor Hari Dhillon who has taken over the role on Broadway is so refined and elegant that he seems like he’s already a member of the club who can treat the roadblocks the play throws his way as just minor annoyances (click here for an interview with the actor).

Meanwhile, the famed dinner party scene in which the characters throw political correctness aside and painfully poke at one another’s biases is undercut by Josh Radnor, fresh off a nine-season run on the CBS sitcom “How I Met Your Mother,” who seemed to think and act as though his character has the alpha role.

My husband K hadn’t seen the play before and, on the basis of the performance we saw, couldn’t understand why I’d originally been so excited by Disgraced. So he opted not to see The Invisible Hand, which is too bad because nearly everything about this one shows off Akhtar at his best.

The play opens in a room where an American banker named Nick (Justin Kirk) is being held by Islamic militants who want to ransom him for $10 million. The kidnapping is a mistake. The militants meant to take Nick’s boss and while the bank might have paid for the big honcho, Nick knows that it won’t do the same for him and he can only scrape together $3 million on his own. So he offers to use that money as a bankroll he will use to play the markets and make the rest.

During that time, Nick attempts to bond in different ways—and with varying success—with his captors: his naive primary guard Dar (Jameal Ali), the more militant—and volatile—British convert to the cause Bashir (Usman Ally) and their group’s leader, the too-smooth Imam Saleem (Dariush Kashani).

Akhtar is a smart guy and a talky writer and this play, like his others, is filled with highbrow speeches about politics, religion and, in this case, economics (the hand referred to in the title is not God’s but Adam Smith’s). In fact, there’s so much talk about how the financial markets work that I felt at moments as though I were in an Econ class  and yet, the financial machinations are presented clearly enough that I might have passed a test afterward (click here for the chear sheet the theater has posted).

Kirk combines the cocky optimism that has allowed Nick to be a successful player in the world of high finance with the crippling fear of a man who knows he’s just one slip away from being killed. Ally, who impressed me back in 2010 when he played the Indian wrestler who was forced to dress up like Osama bin Laden, call himself The Fundamentalist and adapt a trademark move dubbed the “sleeper cell kick” in The Elaborate Entrance of Chad Deity, is just as terrific as Bashir.

His physiognomy probably means Ally is constantly being asked to play a terrorist of one sort or another (click here to listen to another actor of Middle Eastern descent talk about that kind of pigeonholing). But here he breaks through the convention to create a guy who is funny one moment (and a fan of American pop culture) scary the next (and a critic of the way the U.S. treats the disenfranchised) but always recognizably human.

Recent events in Syria and Yemin bring extra currency to The Invisible Hand but the play and this production are deserving enough to be seen on their own right.

I liked Disgraced a lot. I'd just finished Ayad Akhtar's novel American Dervish, which is about a Pakistani-American boy and his exploration of Islam. So this very much feels like a continuation. There are many of them same themes. Some of the characters did seem like points of view rather than fully formed human beings and the dialogue felt a little like speechifying. Still, it's a point of view you don't hear very often. The play raises interesting issues and it's a work I wanted to talk about afterward. From your description, I do wish I'd seen it off-Broadway.