Falling Back in Love with "Love Letters" 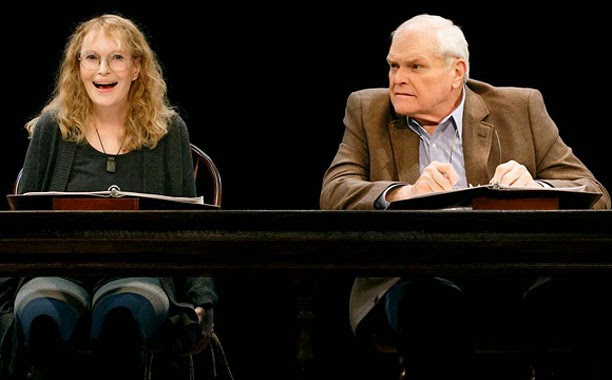 When A.R. Gurney’s Love Letters played at the old Promenade Theatre in the spring of 1989, the actors cast as its epistolary partners—the very wealthy and very WASPy Melissa Gardner and the equally WASPy but only well-to-to Andrew Makepeace Ladd III—changed every week.

I went to see three, or maybe four, of those pairings and would have gone more if I’d had the money. For this two-hander about the 50-year relationship between a wild child and a straight arrow moved me to tears each time I saw it. And now the revival that has just opened on Broadway with Mia Farrow and Brian Dennehy has sent tears rolling down my cheeks again.

I think I so love Love Letters because it is theater at its most elemental. A female and a male actor sit at a table on a bare stage and read from a series of letters that begins when their characters are seven and, 90 minutes later, ends with the death of one of them.
I know it doesn’t sound like much and as my theatergoing buddy Bill and I settled into our seats at the Brooks Atkinson Theatre, even I had some qualms about whether this play, which hinges on the now quaint practice of writing letters, would live up to my memories of it, still hold my interest. But, under Gregory Mosher’s astute but unfussy direction, I once again fell completely under its thrall.

The letters exchanged are funny and gossipy but bits of more serious life—a stepfather’s unwanted touches, a son’s problems with drugs, an interracial affair, a return to rehab—sneak in between the lines and pierce the heart.

All the while, Gurney and Mosher make it clear that the sustaining anchor point for Melissa and Andy is the love they share even as they drift into affairs and ultimately marriages with other people.
Still, it’s the acting that sustains Love Letters. It offers a textbook lesson in the alchemy that can occur when talented actors bring their distinctive personalities to rich roles. And because the actors literally read the letters from the script and don't require much rehearsal, it’s always been easy to draw that top-shelf talent (click here to see a history of the play).

A revolving cast for this production has already been set with Carol Burnett replacing Farrow when her run ends on Oct. 10. Then Alan Alda and Candice Bergen are scheduled to move into the chairs on Nov. 9, followed by Stacy Keach and Diana Rigg on Dec. 6 and Martin Sheen and Anjelica Huston on Jan. 10 (click here to read a feature in in which some of them share memories of personal love letters they've received or sent).
I’d expected the always formidable Dennehy to be terrific but he started out a little stiff at the performance Bill and I saw. It was almost as though he wasn't quite comfortable pretending to be the grade and prep school aged Andy.

But as the character matured into manhood, Dennehy relaxed into the role and with the smallest of gestures—a halting intake of breath, the slump of his massive shoulders—masterfully conveyed the profound desperation of a man who always makes the choices society expects from him instead of the ones he yearns for.
But it was Farrow who proved a revelation to me. Melissa, the poor little rich girl who never seems to do the right thing, is always the flashier part but this actress who last appeared on Broadway in 1980, digs deep into the marrow of the character.

Combining her girlish voice and fluttery mannerisms along with the moxie that allowed her to be the consort of high-maintenance men from Frank Sinatra to Woody Allen, Farrow shows the fragility hiding behind the bravado as Melissa struggles to be accepted for who she is rather than what she should be or what she has.
Even after having seen Stockard Channing, Joanna Gleason and Swoosie Kurtz (all magnificent) do the part in the ‘80s, I was knocked out by Farrow’s performance and can’t imagine a better Melissa.

And yet, I've got to admit that I’m curious to see what all those others will do with the role when their turns come.