To the Bone Cuts to the Meat of Immigrant Life 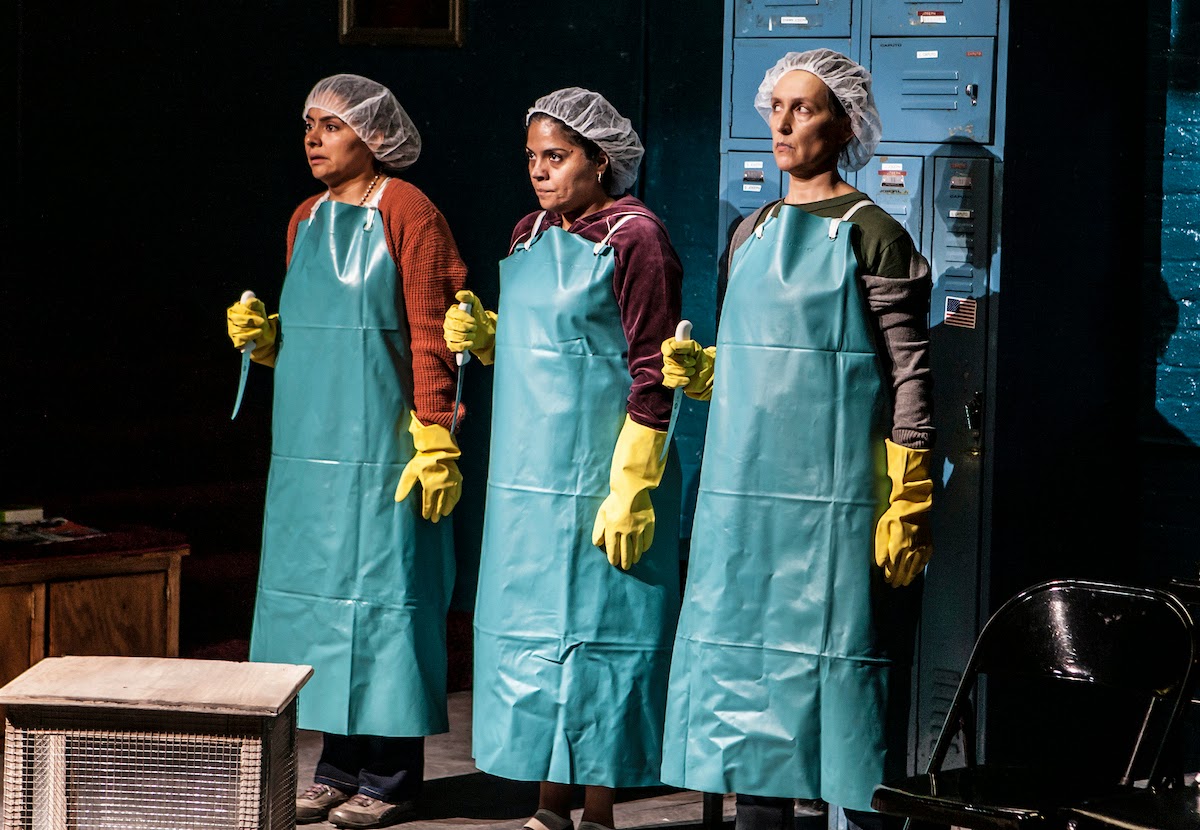 As regular readers know, I’m a big fan of plays about poor and working class people. But I’m also a scourge about most of the ones I see because they tend to stereotype their subjects or condescend to the people they’re portraying. And that is why I so like To the Bone, the new play about undocumented immigrant women that treats its subjects with compassion and dignity.

The play, which is running at the Cherry Lane Theatre through Oct. 4, was written by Lisa Ramirez, whose last play Exit Cuckoo was a one-woman show about nannies based on her own experience of working as one.

For To the Bone, Ramirez got first-hand testimony from Latina women who work in the poultry farms that have sprung up in upstate New York over the past couple of decades and that are worked mainly by people who have made the long and dangerous trek from Central America for the chance to have a better life (click here to read some of their real-life stories).
I had thought a show based on interviews would be one of those docudramas like The Exonerated, in which actors recite the comments of the interviewees verbatim. But Ramirez has written a traditional narrative, although it bristles with the kind of unabashed passion for social change that would make an old agitproper like Clifford Odets proud.
And, like much of Odets’ work, the story she tells is melodramatic. That’s become a bad word for most critics and I’ve used it as a putdown too.  But I actually don’t mind melodrama if it’s put to good use and done well, as is the case here (click here to read about the making of the show).
What distinguishes To the Bone is that instead of viewing her subjects voyeuristically and harping on the alienating behaviors that poverty can provoke, Ramirez writes from the inside, underscoring the simple and complex human traits that her characters share with the rest of us.
At the center of her tale are four women who share a modest house in Sullivan County, the agricultural region about 75 miles from Manhattan. Olga (the playwright herself) is the dominant force. She’s a widow who owns the house, has a green card, and is the mother of a young-adult daughter Lupe (a vivid Paola Lázaro-Muñoz), who writes rap lyrics and aspires to go to NYU to study law so that she can better fight for rights for her people.
The other two women, Reina and Juana, are in the U.S. illegally and rent rooms from Olga but have become like family. They all bicker, share meals, listen to one another’s dreams, rub one another’s aching muscles after 10-hour days on the assembly line at the nearby poultry factory, and chip in to pay a likeable guy named Jorge to drive them back and forth from the plant since none of the women can afford a car and public transportation is spotty.
The play kicks into action when Reina’s niece Carmen, who has abandoned her studies in Honduras to travel north for a job that will allow her to help her ailing mother back home, arrives to live with the others and to find work at the plant. But Carmen quickly catches the eyes of Jorge, the plant owner Daryl and, perhaps, of Lupe as well.
Soon, a rape occurs. Reina and Juana, frightened of losing their jobs or being deported, advise Carmen to keep quiet about it. But Olga, who has a dangerously volatile temper, has other plans.
The denouement may be predictable but director Lisa Peterson makes the journey there engrossing.  She and a design crew lead by set designer Rachel Hauck create the women’s hermetic world by lining the theater’s walls with chicken coops and positioning key fixtures—the time clock they have to punch, the lockers where they change into work clothes, the backyard picnic table where they eat on warm nights—within a playing space that is surrounded on three sides, bringing the audience in up close (click here to read about how they did it).
Peterson adds additional theatrical flourishes that include choreographed routines that illustrate the soul-squelching monotony of spending hours on an assembly line and slowing down the action for poetic soliloquies.
The acting is first-rate, with each one of the eight-member cast giving a performance grounded in reality. The result is a nuanced portrait of the forgotten people behind the statistics in this country’s ongoing immigration debate.  Attention, to paraphrase another chronicler of the downtrodden, should be paid.

Labels: To the Bone