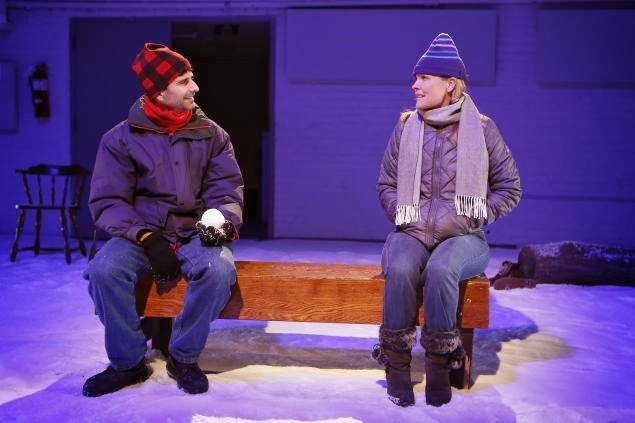 If you crossed the linked stories in the 2003 movie “Love Actually” with the quirky small-town characters of the ‘90s-era sitcom “Northern Exposure” you might end up with Almost, Maine, the slight but sweet rom-com that the Transport Group Theatre Company opened last week at The Gym at Judson.

The title refers to a blue-collar town in the northernmost part of Maine, where most residents work at the local mill and drink at places with names like the Moose Paddy. The action takes place on one wintry Friday night (the floor of The Gym is covered with fake snow) and consists of nine vignettes in which couples try to come together or break apart.
All of these amorous coming and goings were written by the actor John Cariani, who is best known for his performance as Motel the tailor in the 2004 revival of Fiddler on the Roof but who grew up in northern Maine (click here to read about him).

Cariani's play was first done in Portland in 2004, where it was warmly received. But an off-Broadway production in 2006 didn’t fare as well. “Almost, Maine may leave the cloying aftertaste of an overly sweetened Sno-Kone,” wrote New York Times critic Charles Isherwood.
Of course, snow cones are a popular treat, at least they are outside New York. Over the past seven years, Almost, Maine has become one of the most performed plays in American high schools, even one year beating out the previous champ, Shakespeare’s Twelfth Night.

So you can understand that there was no way my theatergoing buddy Bill and I could resist seeing the show when we heard about the current revival, which is playing through March 3.  How could we not see for ourselves what all the fuss was about?

Cariani started writing Almost, Maine as material he could perform for auditions. And the play still has that offhand air about it. Only one scene involves more than two people. Clichés abound. But each character is given the chance to show both humor (Cariani writes some genuinely funny lines) and pathos.

The 19 parts are probably divvied up in high school productions but Almost, Maine was originally designed for a quartet of actors to play all the roles. All four actors in this production, including Cariani himself, clearly relish the challenge of fast changing from one set of snow wear to the next, cloaking themselves in the personalities of the different lovers and making believable the bits of whimsy embedded in the play: one character carries her broken heart around in a paper bag and occasionally rattles the pieces, others buckle at the knees when they literally fall in love.

Under the astute direction of Jack Cummings III, they’re all quite good but first among equals is Donna Lynne Champlin, a Rosie O’Donnell look-alike who can’t seem to do anything that’s not rooted in emotional truth.

Still, it all proved to be too twee for Bill. He harrumphed about how he didn't buy a bit of it all the way to our dinner at North Square, a little place on the corner of Washington Square Park where the chocolate cake put him in a much better mood. I, on the other hand, got a nice little kick out of the show.
Maybe that’s because I went to high school in Maine and retain a fondness for the place. Maybe it’s because it’s nice to see a show that places as much value on ordinary people who go bowling and then chug a couple of beers at the local bad-named bar as is so often placed on Fitbit-wearing urbanites who quaff Sancerre at trendy gastropubs.

Or maybe it’s because we’re coming up on Valentine’s Day and like all those high school students directing and acting in productions of Almost, Maine across the country, I’m just in the mood for some sweet-tempered fantasies about being in love.