"The Correspondent" Botches Its Message 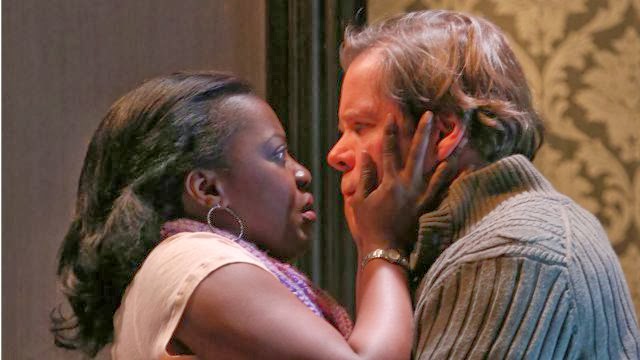 Death pops up fairly regularly in plays. But its companion grief—the agonizing bewilderment that follows the loss of a loved one—appears less frequently. And that’s why I thought it might be interesting to see The Correspondent, the new play about a man mourning the recent death of his wife that opened at the Rattlestick Playwrights Theater last week. But, alas, seeing it sparked a different kind of grief for my theatergoing buddy Bill and me.

I don’t know if the playwright (Ken Urban) the director (Stephen Brackett) or even the set designer (Andrew Boyce) is to blame but The Correspondent turns what could have been a meaningful meditation on grief into a cheesy episode of “American Horror Story.”
My eyes started rolling right from the first scene when a middle-aged white guy with the overly-portentous name of Philip Graves (Thomas Jay Ryan) brings home a young black woman named Mirabel (Heather Alicia Simms) and starts discussing a transaction that seems to be about sex but is actually about the fact that Mirabel’s supposed to be dying and Philip is paying her to deliver a message to his late wife when she gets to heaven.

It’s no spoiler to say that Mirabel doesn’t die and that she and Philip fall into an uneasy—and unbelievable—relationship. Meanwhile communications with the dead wife somehow begin when letters filled with things only she would know start appearing on Philip’s doorstep.

The carrier turns out to be an overwrought young man (Jordan Geiger) who seems to know even more intimate details about the Graves’ married life. Cue scary sound effects and spooky lighting.
Urban’s underlying message that grief can lead to a kind of surreal insanity will ring true for anyone who has gone through that kind of anguish but he doesn’t know how to make a compelling story out of it. Extraneous plot points—Mirabel’s pimp, a dinner at the law firm Philip heads—are introduced and then casually abandoned.

And the playwright gets no help from his director. The staging here is some of the clumsiest I’ve seen in a long time.  When one character is asked to give the other two privacy, Brackett has him go out what is supposed to be the door of the apartment instead of into what's been established as one of its other rooms. A graphic sex scene, complete with full frontal nudity, is embarrassing for both the actors and the audience.
Then there’s the set.  Philip is supposed to be the senior partner of a major Boston firm but the dingy apartment looks as though he’s drawing a paralegal’s salary. I know that Rattlestick productions are done on a tight budget but that’s where creative imagination is supposed to step in.

The play only lasts 90 minutes but it seemed longer. I heard exasperated sighs all around me as we all sat there lamenting our lost time and the lost opportunity to give grief its proper due.