"A Man's A Man" is Brecht with Heart 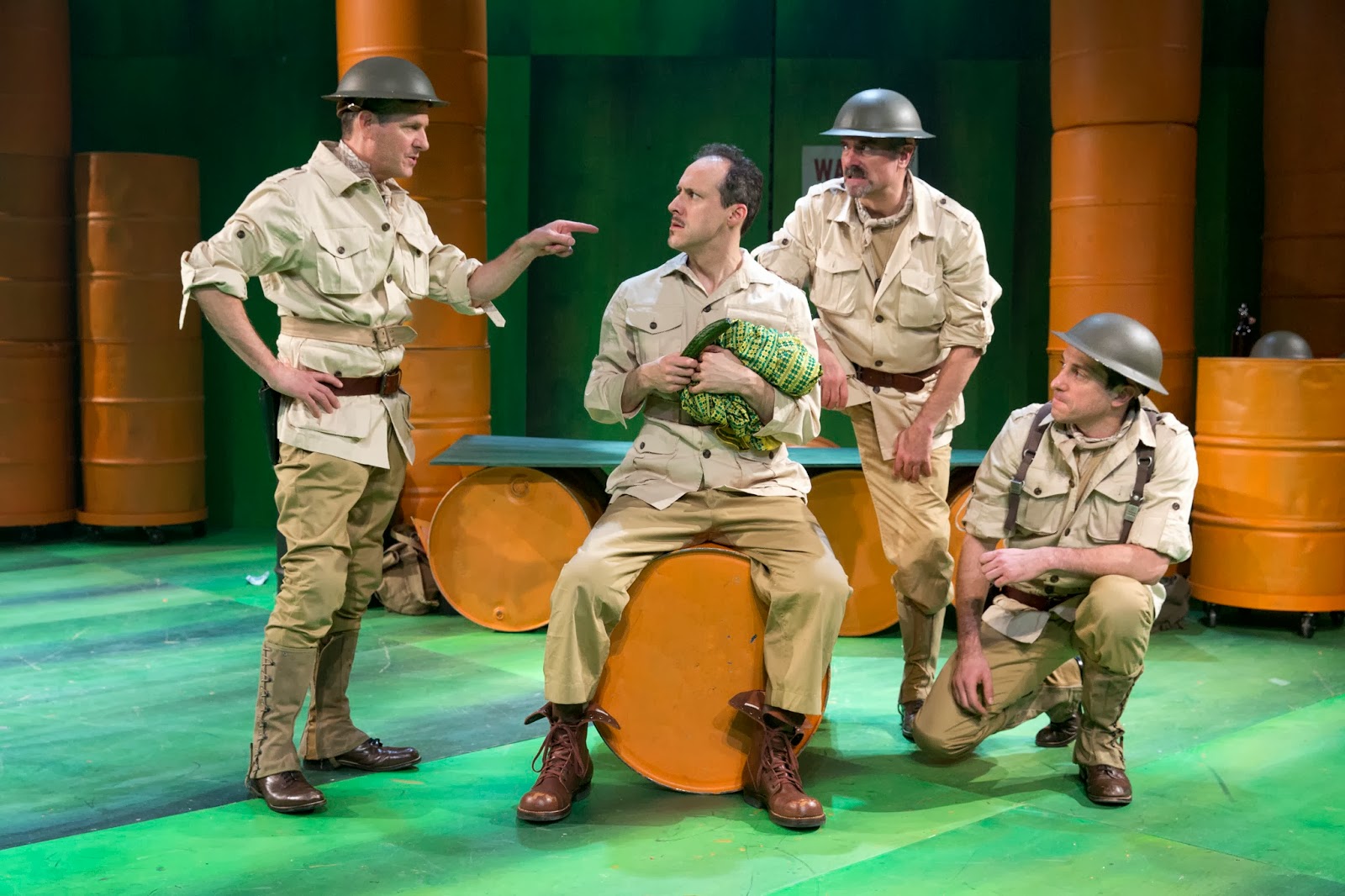 Bertolt Brecht famously championed the theater of alienation but the revival of his A Man’s a Man that opened last week at Classic Stage Company is oddly endearing.

Like so many works by Brecht, the play (Man is Man, in the literal translation) deals with war, corruption and the suppression of individualism. In this case, the time is 1925 and the war is between nationalistic Indians seeking their country's independence and soldiers of the British Raj assigned to hold onto that part of their empire.
The play opens with four of the soldiers trying to rob a temple so that they can get money for booze. When one of them suffers an injury that will connect them all to the crime, his mates hide him away and then draft a naïve farmer named Galy Gay to assume his identity so that their fierce unit commander Bloody Five (an almost unrecognizable but appropriately blustering Stephen Spinella) won’t become suspicious.

Also important to the plot are the money-hungry Widow Begbick, who runs the local tavern and also happens to be Bloody Five’s paramour, and Mr. Wang, a local warlord.
It’s a ridiculous premise and Brecht knows it but that’s all part of the game. The idea is to reel in the audience with the silliness and then shock it with the way the guileless Galy is made over into a ruthless fighting machine.
Brian Kulick, CSC’s artistic director, seems most comfortable with the humor, staging the show with the kind of self-consciously arch zaniness that marked the old Ealing Studios comedies from the 1950s.
He’s aided by an affable cast.  And to amp up the merriment, the widow is played by a man, the drag artist Justin Vivian Bond, formerly of Kiki and Herb, while Mr. Wang is played by a woman, Ching Valdes-Aran.
In customary Brechtian style, there’s a lot of direct address to the audience and some musical interludes, supplied in this production by the busy Duncan Sheik, who, in addition to doing the score for American Psycho now playing in London, also composed the music for the less successful production of The Caucasian Chalk Circle that CSC did last spring (click here to read an interview with the composer).

The set created by Paul Steinberg is spare but malleable. He uses a painted backdrop, a green carpet and a collection of orange oil cans that are rolled around to create a variety of settings, from the widow’s bar to the inside of a pagoda—and to make one inanimate character.

It all adds up to a good time and it seems unfair to single out any one performer but Bond is particularly winning. His Widow Begbick may have more heart than Brecht intended but Bond brings such ardent poignancy to the melodic ballads Sheik has composed that even Brecht might have been moved.

This was my first encounter with A Man’s a Man so I can't say for sure that this approach is exactly what Brecht intended it to be (a few characters have been cut and maybe some scenes too) but I enjoyed it. So much so that even though I usually shrink from any kind of audience participation, I was drawn in this time.  When one of the soldiers came over and, with the full audience looking on, locked eyes with me, I leaned in and gazed right back.