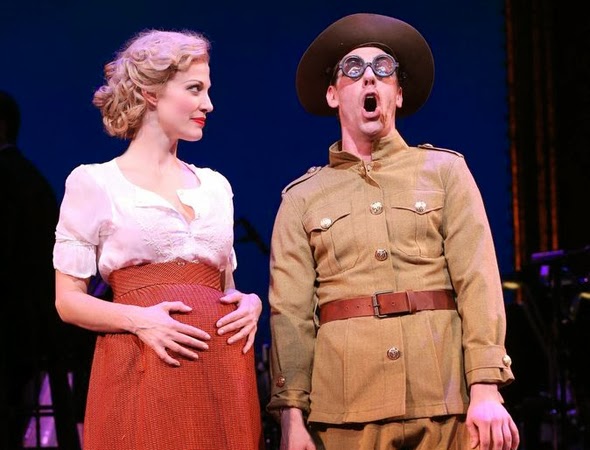 From Jan: So much theater.  So little time.  I put the Encores! production of Little Me on my calendar as soon as I heard about it but somehow I didn’t get around to getting tickets and since, like all Encores! shows, it will close on Sunday after just five performances, I won’t get to see this beloved comedy about a poor girl named Belle Poitrine (née Schlumpfert) and the quest for love and security that takes her through seven different men, six of whom are usually played by one very talented comedian.

Luckily, my theatergoing buddy Bill managed to see the show at its second performance, and since this is such a cult favorite of people who really love musicals, I’m turning today’s post over to Bill so that he can share his thoughts about it:
Until sometime early in the second act, I'd been thinking pretty much nonstop:  "Move it to Broadway tomorrow." Leaving totally aside the question of whether it could succeed there without a nationally known star, the show and production were that wonderful.
Neil Simon's book (I don't know how much it owes to the original novel by Patrick  Dennis of “Auntie Mame” fame) is as funny as anything around ("Book of Mormon" funny, "The  Producers" funny).

The Cy Coleman-Carolyn Leigh score is chock-full with one catchy song after another. The production is expertly and wittily staged and choreographed, by John Rando and Joshua Bergasse, respectively. And from top to bottom the whole show is wonderfully cast (including terrific actors in small roles they'd be unlikely to want to play on Broadway.)

True, Christian Borle—clever and funny as he is—isn't as over-the-top as Sid Caesar was in the original 1962 production and Martin Short was in the 1998 revival, but what he lacks in outrageousness he makes up for with enormous likability, charm and inventiveness. It's a smart, sharp performance.

But by the middle of the second act, I wanted something more from Borle: I wanted him to top himself. And he just didn't. Or perhaps, given the book, he couldn't. (Though with more rehearsal time and performances under his belt, and considering his Tony-winning performance in Peter and the Starcatcher, I'd like to think he could.)
Just as disappointing, maybe more so: It's a front-loaded show. The second act has the knockout "Little Me" duet between Judy Kaye as the older Belle who’s dictating her memoirs and Rachel York (wow!) as the younger Belle, but not much else—certainly nothing to rival the string of winners in the first act. Still, what a score! (I've already started playing my CD of the Martin Short revival in the car as I drive.)
The entire show is so expertly performed and played (with minor exceptions, no one except Kaye even carried the book—and she only because she bears the show's enormous story-telling burden) and so lavishly mounted, it's obvious a move is in mind.  But I'm afraid that this may be one of those wonderful Encores! productions, like so many have been, that will go down in the books as, "Glad to have been there, sorry that you weren't."