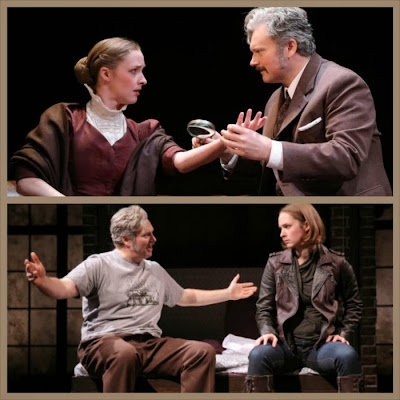 Whoever is picking the plays for Playwrights Horizons clearly wants the people who see them to come out thinking hard and talking seriously about them.

So far this season, the company has produced Mr. Burns, a Post-Electric Play (the after-the-apocalypse tale about a world in which “The Simpsons” sitcom is a sacred text that I didn’t initially warm to—click here for my review—but I’m still thinking about three whole months after having seen it) and The Patron Saint of Sea Monsters (a trying-too-hard-to-be-clever black comedy that I disliked so much, I left at intermission).

Now comes The (Curious Case of the) Watson Intelligence, three thematically-linked and interwoven stories about the push and pull of relationships that managed to both challenge and charm me.

Central to each story is someone named Watson. In one, it is Thomas A. Watson, the assistant to whom Alexander Graham Bell placed the world’s first telephone call. In another, it is Dr. John Watson, the trusty sidekick and Boswell to Sherlock Holmes.  And in the third, it is both a robot cousin to the IBM supercomputer that won the TV game show “Jeopardy!” and a sweet IT guy who bumbles into a romantic triangle.
Similarly, all the women in these three-character tales are named Eliza and all the other males are called Merrick. This could be confusing but sharp direction by Leigh Silverman,  smart costumes by Anita Yavich and a fast-moving team of dressers do a great job of keeping each narrative distinct while still allowing them to combine into a resonant meditation on the roles desire and need play in our quest to connect with one another.

But of course, major credit must go to playwright Madeleine George, who came up with this period-jumping piece that boasts the same mix of post-modern cheekiness and heart that has made George Saunders' collection of short stories one of the most acclaimed books of this year.

Madeleine George's exploration of love is so heartfelt that although she's a newlywed, I found myself wondering if she'd written the play to help her move past a bad breakup or a relationship she still regrets. She doesn’t pretend to have answers to the questions her play poses but she clearly delights in pondering them (click here to read an interview with her).
Yet the biggest hand must be saved for the three-member cast of David Costabile, Amanda Quaid, who was so very good in the play Cock and is becoming an actress worth seeking out, and most of all, John Ellison Conlee, who is giving one of the best performances of the entire year.

Now, this is where I say that this isn’t a perfect play.  Cause it's not. It trips over its own feet in places (including with the too cutsie title).  And there’s a coda that saps some of the momentum that has come before it.

But there’s also an earlier scene in which IT guy Watson declares his love for modern-day Eliza that is going into my pantheon of all-time great romantic scenes alongside Bette Davis and Paul Henreid sharing a cigarette in “Now Voyager,” John Cusack holding up a boom box outside Ione Skye’s room in “Say Anything,” and Fosca’s singing “Loving You” in Stephen Sondheim’s Passion.

That scene alone is worth making the effort to see The (Curious Case of the) Watson Intelligence before it closes on Dec. 29.

Labels: The (Curious Case of the) Watson Intelligence