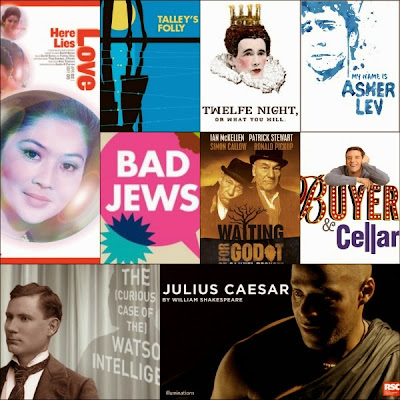 Who’s to say what were the best shows of 2013?  Even the august New York Times critics can’t agree on that; only two shows (Natasha, Pierre and the Great Comet of 1812 and Twelfth Night) appeared on both their 10 Bests lists.  (Click here to check out a compilation of the lists from all the top critics.)

So my list this year isn’t going to try to determine which shows were the best, instead it’s just going to focus on the 10 shows I enjoyed the most—the ones that made me laugh out loud, tear up, sigh in wonder or that still linger in my mind no matter how long ago I saw them. And I’m going to share the moments that made me fall in love with each of them. 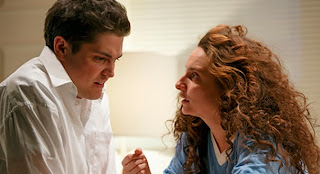 BAD JEWS.  Much praise—and deservedly so—has gone to the talented actress Tracee Chimo for her take-no-prisoners  performance as a young woman who is battling her cousins for a keepsake that helped their adored grandfather survive the horrors of the Holocaust. But underneath her performance and the appreciative laughs it engenders, is a serious meditation on how we define ourselves and how we should honor the memories of those who helped to shape us.
The moment:  I had a good time but it was the revelation of how far the quietest of the three cousins would go to venerate their grandfather that clinched the play’s place on this list and makes it a show worth seeing regardless of who is in the cast.
You can read my original review by clicking here. 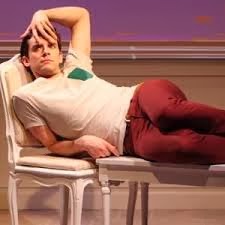 BUYER & CELLAR. The playwright Jonathan Tolins and the actor Michael Urie combined their considerable talents to turn this one-man reverie about a down-on-his-luck actor who gets a job tending the shops that the real-life Barbra Streisand has created in the basement of one of her homes into one of the most enjoyable evenings I’ve had in the theater in years.
The moment: Urie, who plays all the parts, doesn’t impersonate Streisand so much as channel her and he’s at his most affecting when she confesses her insecurities with such poignancy that I actually ached for the woman within the superstar.
You can read my original review by clicking here.

THE (CURIOUS CASE OF THE) WATSON INTELLIGENCE. Playwrights Horizons has offered a slate of smart and innovatively told plays this year. Most critics have favored Mr. Burns, a Post-Electric Play, in which “The Simpsons” sitcom becomes a talismanic text after the apocalypse.  But I prefer this time-shifting piece that links three stories about relationships involving men named Watson—Alexander Graham Bell’s assistant, Sherlock Holmes’ sidekick and a contemporary IT guy—because it deals so honestly with the tension between desire and dependence.
The moment: The IT guy’s attempt to hold on to the woman he loves was the most naked demonstration of unconditional love I’ve seen onstage since Donna Murphy's Fosca declared hers for Giorgio in the original production of Stephen Sondheim and James Lapine’s Passion.
You can read my original review by clicking here.

THE EXPLORERS CLUB. Nell Benjamin’s giddy comedy about the eccentric members of a Victorian-era men’s club and the intrepid woman who wants to join their ranks had nothing more on its mind than good old-fashioned fun and it provided oodles of it for both the actors onstage and the theatergoers in the audience.
The moment:  I’m still giggling about the slapstick choreography in the cocktail hour scene in which drinks were literally flung through the air—and caught without spilling the liquid contents.
You can read my original review here.

HERE LIES LOVE: Everything about David Byrne and Fatboy Slim’s musical biography of Imelda Marcos worked for me. The songs were catchy. The actors were committed.  The story was well told. But best of all was Alex Timbers’ staging, which had the audience on its feet the whole time and moving around in a space outfitted as one of the discos Marcos loved to frequent during her heyday as the First Lady of the Philippines.
The moment: I usually hate audience participation and so I knew this show was something special when I found myself not only dancing but cheering as we audience members were encouraged to play a variety of roles, including the street mobs that supported Marcos and her husband Ferdinand.
You can read my original review by clicking here. 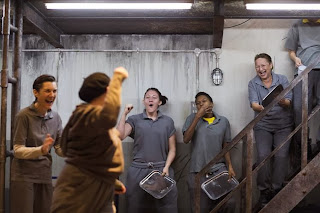 JULIUS CAESAR. This nod goes to both the Royal Shakespeare Company’s all-black production set in a modern-day African nation that played at BAM’s Harvey Theater and the Donmar Warehouse’s all-female version set in a women’s prison, both of which brought new dynamism to Shakespeare’s political tragedy about friendship, honor and power.
The moments: When the drums began to beat and a befeathered soothsayer chanted the warning to beware the Ides of March, the RSC production became so viscerally alive that I could hardly wait to see what the high-estrogen version would do with the play. And when Frances Barber’s butch Caesar swaggered onto the stage at St. Ann’s Warehouse and greeted Cush Jumbo’s Mark Antony with an anything-goes kiss, I knew I was in for another great night.
You can read my original reviews by clicking here and here. 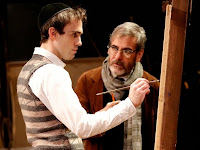 MY NAME IS ASHER LEV. I’m as surprised as you might be to find this one on my list.  For starters, it opened in November 2012 but I didn’t see it until February of this year and so here it is even though it didn’t make the cut on the lists of the major critics for either 2012 or 2013.  But Aaron Posner’s adaptation of the Chaim Potok novel about an Orthodox Jewish boy who breaks from his family’s tradition to fulfill his destiny as an artist touched me deeply.
The moment: The acting was superb but what still lingers in my mind were the way James F. Ingalls’ lighting subtly reflected the transcendence of an artist coming to terms with his own creative power.
You can read my original review by clicking here. 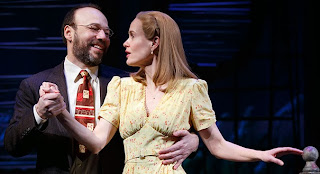 TALLEY'S FOLLY.  Lanford Wilson’s two-hander about the coming together of a middle-aged Jewish accountant and a Protestant spinster won the Pulitzer Prize in 1980 but it won my heart with this revival by the Roundabout Theatre Company.
The moment:  Actually, I fell for it as soon as Danny Burstein walked onstage at the beginning of the play and confided his plan to woo the reluctant object of his desire. The language was simple but eloquent, the acting natural and yet elegant, both reminders that great theater doesn’t always need razzle to dazzle.
You can read my original review by clicking here.

TWELFTH NIGHT. This is the one production that seems to have made it onto everyone’s list. And I'm joining the chorus of praise because it is great fun to see Shakespeare’s beloved comedy performed as it would have been done in his day with men playing the female parts and the stage illuminated by candlelight.  Plus there’s a fabulous pre-show in which the actors come out early to dress and put on their makeup right in front of the audience.
The moment:  Watching Mark Rylance garb himself in not only the large hooped skirts but the small fluttery mannerisms of the noblewoman Olivia won me over instantly.
I haven’t yet reviewed this one but plan to talk about both it and Richard III, with which it is being performed in repertory. 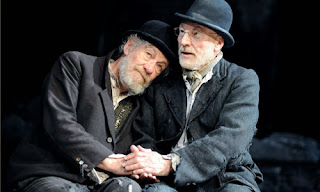 WAITING FOR GODOT: What could any theater lover want more than to see two of the world’s most acclaimed classic actors in one of the world’s most revered classic plays?  Ian McKellen and Patrick Stewart are pitch perfect as Samuel Beckett’s existential vagabonds and it’s a privilege to be able to see them.
The moment: Their first exchange has all the humor and pathos that the parts demand and signals that the you can just sit back and enjoy because there are masters at work.
I haven’t reviewed this one either but keep an eye out for my post about it and its repertory partner Harold Pinter’s No Man’s Land.