Hurrahs for Celebrated Moments in the Theater 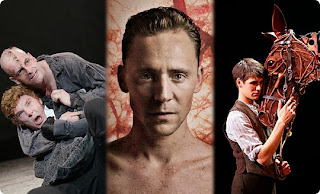 Last night my theatergoing buddy Bill and I went to see an NT Live encore presentation of  the 50th anniversary celebration that London's National Theatre threw for itself last month.  And although I hadn't intended to write about it, I can't resist saying a few words because it was such great fun.

There were video clips of performances by the company’s founder and guiding spirit Laurence Olivier and live appearances by actors who have been company members over the years from Maggie Smith (also utterly delightful in a clip from the 1964 production of Hay Fever, directed by Noel Coward) Derek Jacobi, Judi Dench and Olivier’s widow Joan Plowright to Adrian Lester, Benedict Cumberbatch, Tom Hiddelston and Joey, the equestrian puppet from War Horse.
I saw some of the later productions—The History Boys (terrific to see the play’s author Alan Bennett ably filling in for the late Richard Griffiths, who died earlier this year) One Man, Two Guvnors; Jerry Springer-The Opera.

And I wish I’d been able to see some of the earlier ones: the company's inaugural production of Hamlet with Peter O’Toole in the title role and Rosemary Harris as Ophelia, David Hare’s The Absence of War and, of course, all of Smith's Hay Fever.
You can get a peek at several of them (as I did) with the iPad app “50 Years of the National Theatre” that the National released last month (click here for it) or with the wonderfully detailed and illustrated program from the Nov. 1 anniversary celebration (click here for that).

And if your nostalgia runs more towards domestic theater, the folks at Marriott Hotels have put together a great interactive timeline of some of the best Broadway musicals from 1937’s Pins and Needles to the current day’s Kinky Boots,” (which you can see by clicking here).