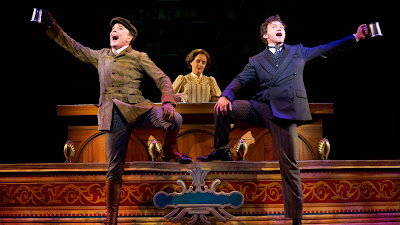 If you’re still looking for a show that will appeal to the entire family—antsy tots, sulky teens, grumpy grandparents and weary everyone else—I have just the thing for you:  A Gentleman’s Guide to Love & Murder, the surprisingly delightful musical that’s playing at the Walter Kerr Theatre.

I say surprising because I wasn’t so sure I was going to like this show. Its poster of a frock-coated gent wearing a top hat and a monocle made me think of The Mystery of Edwin Drood, which I’d just seen last season and although I’d enjoyed it (click here to read my review) I didn’t feel the need to see another Gilbert and Sullivan-era whodunit.

Of course there’s no mystery about who the culprit is in A Gentleman’s Guide to Love & Murder since it’s based on the 1949 British movie “Kind Hearts and Coronets” in which a poor relative systematically murders eight members of an aristocratic family (all eight—the men and the women—played by Alec Guinness) who callously disinherited his mother and now stand between him, a noble title and its accompanying great fortune.

That movie is a cult classic and an old boyfriend once tried to make me watch it when it came on TV but, as I recall, I fell asleep. And I wasn’t any more excited by the creative team behind the new musical version.

The book is by Robert L. Freedman and  the score is by Freedman and Steven Lutvak, neither of whom I’d ever heard of.  And the show is directed by Darko Tresnjak and choreographed by Peggy Hickey, both of whom are also new to me, although I’ve since learned that Tresnjak is the artistic director of Hartford Stage, where this show originated.
The one thing that did pique my interest is that I knew the marvelous actor Jefferson Mays would be playing all the murder victims. Having seen I Am My Own Wife, the one-person show in which he played nearly three dozen characters, I knew how versatile and entertaining Mays can be (click here for a cheat sheet on all the murder victims he plays in this musical).

So the biggest surprise for me was discovering that Mays, as deliciously good as he is, wasn’t my favorite thing about the show or even my second or third favorite in what turns out to be a totally charming confection that whips together low-brow slapstick (for the tots and the teens) high-brow wit (for the grown-ups) and a dollop or two of sex farce (to spark some interest in the weary).
The music is just a pastiche of music hall tunes but the lyrics are clever and the singers, particularly the women—Lisa O’Hare and Lauren Worsham—who play the larcenous main character’s two love interests have voices to die for.

Freedman's book and the staging by Tresnjak come up with hilarious ways to dispatch each of the thoroughly despicable relatives.  And the design team is just as adept.
Alexander Dodge has created a proscenium-within-a-proscenium set that looks as though it comes right off a vintage Christmas card. Meanwhile, costume designer Linda Cho is equally skillful at designing gorgeous and intricately detailed gowns for the women and laugh-out-loud funny costumes for Mays, including my favorite, a bodysuit with bulging biceps for the most ostentatiously macho of the doomed cousins.

And special kudos for the dressers who get Mays out of and into costumes so fast (12 changes in the first act, according to AP) that the characters he plays—from a bosomy matron to a beaver-toothed parson—almost seem to be appearing onstage together (click here to read about how they do it).
But best of all is Bryce Pinkham who plays the murderous title gentleman (click here for a profile of him). The audience needs to root for the guy who is murdering almost everyone in sight for this show to work and Pinkham—who sings well and looks dreamy—is totally winning, particularly in a terrific second-act number that almost stopped the show at the performance my husband K and I saw.

When you add it all up, A Gentleman’s Guide to Love & Murder may not be a great show but it is great fun.  And who doesn’t need a little of that during the holidays?