A Theater Lovers' Guide to the Unhappy Families in "Betrayal," "Domesticated" and "The Commons of Pensacola"

It’s the holiday season so you probably don’t need any more family drama but there are three high profile (and star-studded) shows about familial relationships that I hadn’t gotten around to talking about and thought I'd mention now because seeing any one of them could make you feel a lot more grateful for your own crazy relatives. 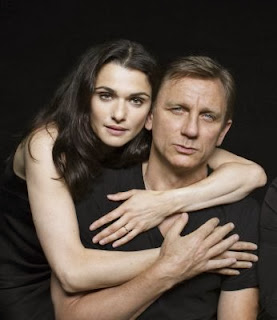 BETRAYAL: This revival of Harold Pinter’s wry exploration of marital infidelity is such a big hit that you probably won’t be able to get a ticket before the run ends at the Ethel Barrymore Theatre on Jan. 5. That’s totally because it stars real-life celebrity spouses Daniel Craig and Rachel Weisz and is directed by the much-revered Mike Nichols. Their version of this dark comedy which famously tracks a years-long affair from its end to its start, hits heavy on the humor, particularly in the intentionally goofy performance of Rafe Spall, who plays the wife’s lover and the husband’s best friend. The approach seems to have worked for a lot of folks; the production has scored an A- on StageGrade, the website that averages the reviews of the leading critics. But treating Betrayal as a sex farce didn’t work for me. Although Craig’s performance as the cuckolded husband totally did (click here to read Maureen Dowd’s interview with him).  Craig is, of course, now best known as James Bond but he earned his bones on the stage (including as the closeted Mormon attorney Joe Pitt in the inaugural production of Angels in America) and even through the din of this overly busy production, he manages to convey the simmering ruefulness of a man who may be able to forgive but who can never forget.

THE COMMONS OF PENSACOLA:  The tragic saga of the investment swindler Bernie Madoff and his family is probably going to supply fodder for writers for generations to come (click here to read about how some of his victims are surviving five years after he bilked them out of their life's savings).  At least a dozen books have already come out, Woody Allen tackled the tale in last summer's movie “Blue Jasmine” and this fall, I saw the Pulitzer Prize-nominated playwright Lee Blessing’s A User’s Guide to Hell, Featuring Bernard Madoff (click here for my review of that one).  Now, the actress Amanda Peet has taken on the story in her promising first play. Her main characters are a former society wife reduced to living in a modest Florida condo after her conman husband is sent to prison, and their grown daughter, a failed actress, who has come to visit her mother for the holidays. They are played by the high-wattage team of Blythe Danner and Sarah Jessica Parker and directed by Lynne Meadow in a potent production at Manhattan Theatre Club that ends on Jan. 26.  Peet’s dialog is snappy and entertaining (click here to read an interview with her) and it’s always a pleasure to see Danner on a stage but Parker is the lynchpin here.  Because of her work on the TV comedies “Sex and the City” and “Glee,” it’s sometimes easy to forget what a formidable actress she is.  But her performance as a shattered woman struggling to keep her family (and herself) together is an awards-worthy reminder. 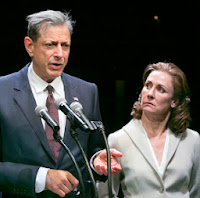 DOMESTICATED:  The family in Bruce Norris' droll comedy, his first play since he won the Pulitzer Prize-for Clybourne Park, will be familiar to anyone who’s followed the news over the last few years: the husband is a high-profile politician who has gotten himself embroiled in a sex scandal; his wife is the woman with the deer-in-the-headlights stare who stands by his side at the press conference while he confesses his sins and begs forgiveness. In this production running at Lincoln Center Theater’s Mitzi E. Newhouse theater through Jan. 5, the husband is played by Jeff Goldblum and the wife by Laurie Metcalf.  They’re directed by Anna D. Shapiro, who knows something about dysfunctional families from helming August: Osage County, and supported by a top-notch ensemble of nine actors who play family members, friends and others who try to help the couple through their hard times (click here to read about the making of the production). But the show is performed in the round and where you sit may affect how you feel about it. Goldblum is almost entirely silent during the first act and because he sat with his back to me for most of that time, I missed the expressions on his face and the delight they apparently gave others who could see them (the show got a B+ on StageGrade).  Still, if you like TV’s “The Good Wife,” you may get a kick out of this.