“The Big Meal” is a Savory Treat 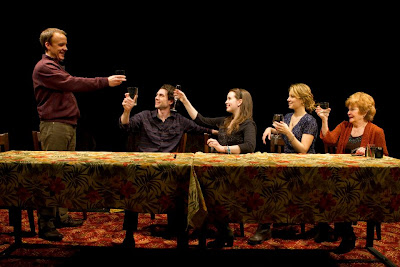 It’s becoming Sam Gold’s world. And we theater lovers will just have to content ourselves with living in it.  Which is fine with me. For over the last three years, Gold has surfaced as one of the most gifted young directors in the business (click here to read a profile of him).
He’s particularly adept at working with new plays, as he showed in his brilliant staging of Annie Baker’s circle, mirror, transformation back in 2009, and as he shows again with Dan LeFranc’s The Big Meal, which just extended its run at Playwrights Horizons through April 22.
I don’t want to oversell Gold but he could be his generation’s Elia Kazan, the go-to-guy for bright young playwrights who are looking for an empathetic helmsman to guide their work from the page to the stage, as Kazan did for the early plays of Arthur Miller and Tennessee Williams.
Gold’s navigations aren't always successful. He was unable to rescue Zoe Kazan’s We Are Here last fall (click here to see my review) and I thought he ran completely aground with the Roundabout Theatre's revival of Look Back in Anger that closed last weekend (click here for my review of that one).  But Gold is now firmly back on course with The Big Meal.
LeFranc’s play channels Thornton Wilder’s streamlined meditations on American life in Our Town and The Long Christmas Dinner. The Big Meal tracks an ordinary couple, Sam and Nicole, through the ups and downs of their nearly 60-year relationship.
The revelations in The Big Meal—the fleetness of time, the primacy of family—aren’t new but LeFranc brings two fresh conceits to the table.  First, he tells the story entirely through the major meals that mark the couple's life—their meeting in a restaurant and the subsequent wedding dinners, birthday meals, funeral luncheons.
The second conceit is to have a quartet of actors play the couple at different stages of their life and play all of their relatives—from infants to old folks—as well. And it is here that Gold’s knack for creative staging proves invaluable.

The challenge in The Big Meal is to keep the audience aware of the quick time changes and split-second transformations as the actors assume different roles. In one scene, for example, David Wilson Barnes plays Sam as a young father dealing with a rambunctious son then, just a few minutes later, he plays the now-grown-up son, while the older actor Tom Bloom becomes Sam.
You have to pay close attention to keep up with all the changes but Gold subtly directs the focus where it needs to be. The Big Meal is only 90 minutes long but it’s packed with lots of laughs and some tear-inducing moments as well. I dare anyone to see it without identifying with the joys and disappointments of at least one of those meals.
It helps that the cast—Bloom and Anita Gillette who play the older characters, Barnes and Jennifer Mudge who portray them in middle age, Cameron Scoggins and Phoebe Strole who play them as young people, Griffin Birney and Rachel Resheff who take on the kid roles, and Molly Ward who is the ubiquitous, and often unwelcome, server at all the family gatherings—is so uniformly terrific.
David Zinn’s costumes and set design are smartly minimal—the actors push tables and chairs together and pull them apart as needed—and Mark Barton’s nimble lighting and Leah Gelpe’s apt sound design help to anchor each distinctive phase.
Still it’s the words and the direction that have to do the heavy lifting of the storytelling. Gold employs some trendy theatrical conventions (the actors stay on stage even when they’re not in scenes and some real food is served and consumed) but everything he does serves a purpose, illuminates LeFranc’s work and, often, underscores its poignancy.
Hollywood has already caught on to Gold and the big talent agency UTA has signed him up. But he isn’t abandoning the theater yet.  In June, Gold is scheduled to direct a new version of Uncle Vanya that’s been adapted by Annie Baker and that will star Reed Birney.  I thought I'd had my fill of Chekhov for a while but this does sounds delicious.