"Regrets" is Stuck in the Past 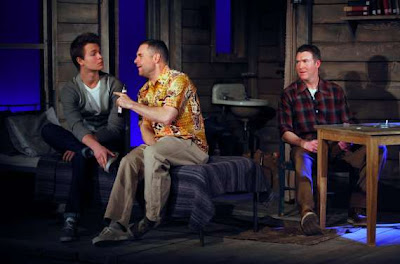 The main image on the cover of the Playbill for Regrets, the new drama playing at the Manhattan Theatre Club through the end of the month, is of a smiling All-American family, circa 1954.  It’s meant to be a joke. For Matt Charman’s play, which is set in that year, is about a Nevada vacation camp where men live just long enough to meet the residency requirement that will allow them to get one of that state’s relatively quickie divorces.
If only that sense of irony had extended to the play itself. For Regrets is as old-fashioned as any play you might have seen on Broadway at mid-century. And, alas, I don't mean that in a good way.

Its characters are a mix of the off-the-rack clichés that once populated WWII movies—the macho bully, always trying to prove his manhood; the nerdy Jewish guy from New York; the good-looking but callow kid; and the principled loner whom everyone respects but no one truly knows.
There’s also a sweet-faced hooker, a jut-jawed FBI agent, and, in a nod to the socially-conscious liberalism that marked such Truman-era movies as “Gentleman’s Agreement” and “Pinky,” a black character struggling to maintain her decency in the face of both casual and authorized racism.
The equally formulaic plot is triggered by the FBI guy’s arrival and assertion that one of the residents is a communist. What follows is the way in which the others respond to the news. At some point, each character gets the chance to proclaim his or her view of the America Dream.
Charman, a rising British playwright, has said that he wanted Regrets to evoke "the dramatic world of the '50s," in both form and content. (Click here to read an interview with him). This kind of square-all-the-corners dramaturgy might be entertaining when an old work is revived or a new one takes a revisionist look at the era as was done with the 2002 film "Far From Heaven," which is now being turned into a musical that will debut at the Williamstown Festival this summer.  But here it just seems kind of hokey and passé.
More imaginative direction might have helped but Carolyn Cantor stages Regrets in a stolid, straightforward way that only underscores the play's creakiness. Still, as is usually the case, the acting is first-rate. There are no marquee names in the seven-member cast but that allows some actors who usually get bit parts to move center stage.
And they make the most of it, particularly the always-reliable Brian Hutchison as the loner and Adriane Lenox, who won a Tony for playing the mother in Doubt, as the black woman who runs the camp. And Ansel Elgort, a senior at Manhattan’s famed performing-arts Fiorello LaGuardia High School, also does nicely in his professional debut as the kid.
My regret is that they weren’t all in a more satisfying play.