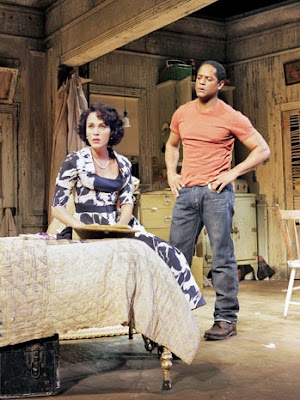 Is any American play better known or more beloved than Tennessee William’s A Streetcar Named Desire?  Even the most casual theatergoers have heard of Stanley's “Stella” cri de couer and know that the play’s ill-fated heroine Blanche has always depended on the kindness of strangers. Streetcar has been revived on Broadway eight times since its debut in 1947 (compared to four times for Our Town and five, including the current revival, for Death of A Salesman, its two closest rivals for the title of The Great American Play).

The original production won the Pulitzer Prize for Drama and made a star of the 23-year-old Marlon Brando, whose performance almost single-handedly changed American acting. Now, Streetcar is back again at the Broadhurst Theatre but this time with a multi-racial cast.

The guiding force behind the new production is Stephen C. Byrd, the investment banker-turned-producer who also brought an all-black version of Cat on a Hot Tin Roof to Broadway in 2008. Byrd is reported to have considered a Broadway transfer for the 2009 Cate Blanchett production of Streetcar that played at BAM but, instead, he has resorted to his old formula: take a brand-name play, cast it with great-looking black and Hispanic actors who have developed followings in the movies or on TV, mix in a stage vet or two for credibility and recruit a woman to direct.

This time out, the lead actors who play Streetcar's Blanche Du Bois, one of Williams' archetypal fading southern belles holding fast to delusions of grandeur, and Stanley Kowalski, her crude-acting but at heart insecure brother-in-law, are the statuesque beauty Nicole Ari Parker from the Showtime series “Soul Food” and the hunky Blair Underwood, who got his start on NBC’s “L.A. Law” and has shown up in many series over the past 20 years including “Sex and the City,” “In Treatment” and most recently “The Event,” in which he played the president of the United States.

Daphne Rubin-Vega, the original Mimi in Rent, brings the stage cred as Stella, torn between the highfaultin dreams of her sister Blanche and the earthy—and sexy—realities that her husband Stanley offers. Actors of color rarely get to play iconic roles like Blanche, Stanley and Stella, at least not in major venues or outside of Shakespeare in the Park productions. But that’s beginning to change.

In addition to Byrd’s production of Cat on a Hot Tin Roof (which starred hunky Terrence Howard and Tony-winners Anika Noni Rose, Phylicia Rashad and James Earl Jones--click here to read my review) Charles Dutton spearheaded an all-black production of Death of A Salesman at the Yale Repertory Theatre three years ago (click here to read my review of it) and even the Royal Shakespeare Company recently announced that it will contribute an all-black version of Julius Caesar to this summer’s World Shakespeare Festival in Britain.

It’s nice to see good actors getting a chance at great parts, but unless an actor is as preternaturally gifted as Brando was, it can take time and a lot of experience on the boards to develop the chops to carry off roles like these and the results in the current production of Streetcar are mixed.

Underwood is now 47, a little old to be playing Stanley (the Polish surname has been dropped for this production) but he’s in great T-shirt-wearing shape. Women in the audience at the performance my sister Joanne and I attended gasped when he took it off, revealing six-pack abs that a 20-year-old would envy (click here to see an interview with him).

And Underwood steps up for the big showy scenes in which Stanley bellows plaintively for his wife to return to him after having abused her and “clears the table” after another fight with Stella and Blanche. But Underwood is still working to show the quieter, underlying fears that drive Stanley into these rages.

Similarly Parker’s Blanche is nowhere near the fragile creature that actors like Jessica Tandy and Vivien Leigh portrayed. Parker’s Blanche may be down but she’s not out.  She’s a survivor.

But because Parker’s commitment to this vision of the character is so thorough, her take on the role pretty much works, even though the "depending on the kindness of strangers" line comes off as ironic since it’s clear that this Blanche has always depended on herself and is likely to continue doing so.

Director Emily Mann accommodates the ethnicity of her actors by subtly underscoring the tensions between African-Americans with light skin and those with darker skin. And she adds a wordless scene in which the nameless neighbors enact a New Orleans-style funeral, complete with jazz music (supplied by Terence Blanchard) and dancing.

Blanchard’s music, which is also used between scenes, calls too much attention to itself and the dancing is superfluous but it’s a real treat to get to see the great Carmen de Lavallade, now 81, sashay across the stage with the elegant sexiness of a woman a quarter of her age.

Streetcar has been playing to audiences that are only about two-thirds full. And so far, it hasn’t fared well with awards nominations, although that may change when the Tony nominations are announced on Tuesday morning.

I can’t say I’m surprised by any of this.  I liked what I saw onstage at the Broadhurst well enough but I don’t think the play would be as well known or as beloved, if this were the first production that had ever been seen.

Labels: A Street Can Named Desire