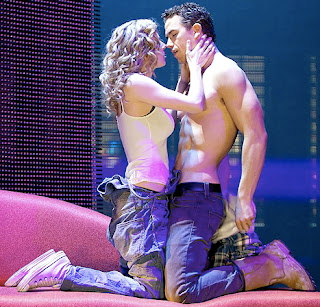 A lot of hard work goes into bringing a Broadway show to the stage. So every time I write about one, I try to remember all the years of study, the hours of rehearsal, the dreams of glory and the realities of having to make a living for the people both onstage and behind the scenes. Which means that I take no pleasure in saying this but I can’t remember when I have disliked a show as much as I dislike Ghost, The Musical.

This musical version of the 1990 movie that won Whoopi Goldberg an Oscar for her performance as a sham psychic who finds that she actually can speak to the dead opened on Monday night at the Lunt-Fontanne Theatre. But, once the theater gods stop rolling in their graves, it probably won’t be there long.

The film, which also starred Demi Moore and Patrick Swayze as lovers who are wrenched onto opposite sides of the life/death divide after he is killed during a botched mugging, was a big hit.  And I recall having a good schmaltzy time when I saw it.  But I had my doubts about how its tricky mix of romance, humor and mysticism would transfer to the stage.

My sister Joanne (always up for a new rock-flavored musical) and I saw Ghost on the day after its director Matthew Warchus won the Olivier for his work on Matilda, the critic and crowd-pleasing musical that is due to transfer from London to Broadway early next year, and so my optimism about Ghost had ratcheted up a few notches.

It plummeted less than 10 minutes into the show.  For starters, the hyperkinetic video images (racing subway trains, gigunda images of the lovers) that Hugh Vanstone put together literally made me nauseous—no joke; I checked my row to see which direction I should take if I had to make a dash for the ladies room. I forestalled the exodus by closing my eyes periodically to keep out the bombardment of flashing images.

The sound is just as bad. The challenge for Bobby Aitken and his sound design team was to come up with a scheme that would not only allow the audience to hear the lyrics and orchestrations clearly but that would signal the supernatural events in the show. What they came up with are sounds as tinny as those coming from one of those $9.99 tape recorders that hang behind the cash registers at drug stores.

On the other hand, the sound quality is not as great a loss as it would have been had David Stewart and Glen Ballard’s score been memorable (click here to read an interview with them). The only song that sticks is a carryover from the film, the old R&B classic “Unchained Melody.”

Ashley Wallen’s choreography isn’t as bad as the other stuff, but too many of the dance numbers make no sense. Why, for example, do people dance with umbrellas in the living room of the couple’s Brooklyn loft?

The illusions that special effects wizard Paul Kieve has created, assisted by Jon Driscoll's shrewd lighting, fare better, although they’re not all as smooth as one might expect. In fact they broke down at a critics' performance a few nights after Joanne and I saw the show.

And don’t even get me started on the way Ghost treats blacks and Hispanics.  I turned in my membership with the PC brigade years ago and I know that Oda Mae Brown, the character Goldberg played, was a flamboyant con artist but Bruce Joel Rubin, who won an Oscar for his screenplay for the movie, has pushed the book for the musical deep into the offensive zone.

Memo to Rubin: Jokes that casually define Hispanics as congenital thieves are not funny.  Meanwhile, a gospel sequence is not only hackneyed but adds insult to that injury by being gratuitous.

The one positive thing I can say is that everybody in the cast works hard, even though they’ve been dissed by the producers who fail to put the names of even the leads on the title page of the show’s Playbill.

Those leads are Richard Fleeshman and Caissie Levy, who exhibit some nice chemistry as the doomed lovers, sing well and are—particularly him—very  easy on the eyes. But no one works harder than Da’Vine Joy Randolph, who steps into Whoopi’s shoes as Oda Mae.

Yet Warchus’ direction and Rob Howell’s intentionally ugly costumes turn Randolph, a Yale-trained actor who has a strong voice and a full figure, into the stereotypical musical mammy that pops up in far too many Broadway shows (click here to read my review on Lysistrata Jones).  Shouldn’t someone as gifted as Warchus have been able to come up with something besides this old cliché?

As I said, I didn’t like this show.  My sister Joanne was more forgiving.  But only slightly.  “How soon do you think it’s going to close?” she asked as we walked up Eighth Avenue for a late dinner at Pigalle, the bistro on the corner of 48th Street where the food is far better than its tourist-trap appearance might suggest.

“They’ll probably hang on with the hope that they’ll get some Tony nominations,” I said.  “Ah,” said Joanne, shaking her head.  “I don’t think that’s going to happen.”