"Look Back in Anger" Looks the Wrong Way 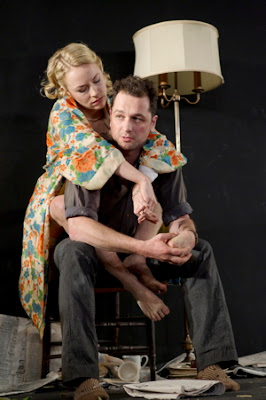 The trouble with seeing the revival of a groundbreaking play is that the ground has already been broken—and has probably been well trod. Trying to recapture the impact of the thing is like trying to re-experience the thrill of someone else's first kiss.

There are few more celebrated groundbreakers in modern theater than John Osborne’s Look Back in Anger, the original “angry young men” drama that shook up British theater in 1956 by moving the action from the upper-class drawing room to the working-class kitchen. The Roundabout is now giving the play a revival at its Laura Pels Theatre but it would be hard to figure out what the fuss was all about if you only had this production to go by.
That’s due in large part to the showy high-concept that director Sam Gold has wrapped around it. Gold has made a name for himself over the last few years by taking an engagingly naturalistic approach to new works by female playwrights like Annie Baker, Zoe Kazan and Theresa Rebeck, with whom he collaborated on the current production of Seminar.
But this time, staging an iconic work by a dead and very macho playwright, Gold opts for an expressionistic approach that pushes the audience away instead of drawing it into the play.
Look Back in Anger centers on Jimmy Porter, a smart but working class guy who rails against the rigidity of the class system that still ruled England after World War II. His uneasy marriage to an upper-middle-class woman only fuels Jimmy’s frustration and rage.
The play famously opens with the wife, Alison, ironing while Jimmy and his best friend Cliff sit reading the Sunday papers and waiting impatiently for the local pub to open. The ironing board and a few Sunday papers are still there on the stage of the Laura Pels but not much else is.
For Gold has had set designer Andrew Lieberman erect a large wall that blocks off most of the stage.  The remaining narrow strip is strewn with rubbish (to symbolize the throwaway quality of the character’s lives?) and the actors are forced to perform all of the action in the tiny area.
They have to squeeze by one another when they want to get from one part of the stage to another.  They have to open and close folding chairs when they need to sit or pull an old dirty mattress across the floor when they need to lie down. All this seems to have unmoored the actors as much as it does the audience.
The Welsh actor Matthew Rhys, best known as Kevin on the TV family drama “Brothers and Sisters,” has the brooding good looks and volatile intensity that seem just right for Jimmy (his fellow Welshman Richard Burton played the role in the 1959 movie) but the impact is undermined when Gold has Rhys idly stand in a visible waiting area at the side of the stage whenever he isn’t in a scene.
A similar tension is also missing from Sarah Goldberg’s performance as Alison. She's a lovely actress but although Gold has said he wanted to emphasize the love story (click here to read an interview with him)  neither he nor Goldberg ever make it clear why Alison is so drawn to Jimmy who is so mean to her.
One assumes she's with him for the sex and the chance to defy the upper-class conventions on which she was raised but all one can do is assume.  Maybe it would have been plainer if Gold hadn’t cut a scene with Alison’s father—and the character of the father—from this production.
Meanwhile,  Adam Driver, a Roundabout favorite, seems to have beefed up for the part of Cliff and has apparently been directed to play him as a muscle-headed lunk, when it might have been more effective to delve into Cliff’s feelings for the couple (possibly homoerotic for Jimmy, a mixture of jealousy and admiring envy towards Alison).
I get that Gold is trying to jolt the audience in the same way that the play did when it opened in 1956.  Most critics back then, with the notable exception of Kenneth Tynan, panned the play. The reviews for the revival are decidedly more mixed.  I'm sorry to say that I fall on the nay side. Call me old-fashioned but I would like to have seen the play as it was written.

Labels: Look Back in Anger