The Living is Now Easy for "Porgy and Bess" 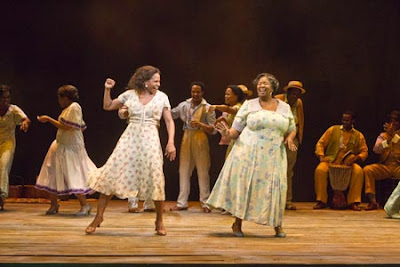 The producers of  the show now known as The Gershwins’ Porgy and Bess announced this week that their controversial remix of the classic musical about lovers in a poor black fishing community along the South Carolina coast is extending its run, appropriately enough, through the end of summertime.
So take that and put it in your hat, Stephen Sondheim.
I’m being cheeky about Sondheim because, as every theater lover knows, he wrote a letter to The New York Times condemning the changes that the revival’s  creative team—director Diana Paulus, book adapter Suzan Lori-Parks and musical adapter Diedre L. Murray—talked about in an interview before the show’s out-of-town run opened in Boston last summer (click here to catch up on all of that).
The team said they wanted to make the show more accessible for contemporary audiences but after the Sondheim letter came out, the chances of showing it to any audiences seemed at risk. But Porgy and Bess, a show about black people written by white people, has always been controversial (click here to read a terrific piece about its troubled history).  So the producers bore down and pushed on.
And now they’re reaping the rewards for their perseverance. The new Porgy and Bess is a critical success, having scored a B+ on StageGrade, which aggregates the review scores of the top New York critics. The show is turning out to be a commercial hit too, filling an average 90% of the seats at the Richard Rodgers Theatre this month, a time that’s traditionally slow for Broadway.
I wasn’t as swept away as some of the people in the audience at the performance my sister Joanne and I attended or as some other critics have been (click here to read some of those reviews) but by the end, I was giving the show a thumbs up too, even if not pumping my fist in the air.
To be honest, I can’t say if I ended up liking this Porgy and Bess because of the production or because of the inherent power of this folk opera that is George Gershwin’s masterpiece.
Over the years, critics of the show have complained that George and Ira Gershwin and book writers DuBose and Dorothy Heyward created a stereotypical picture of African-Americans: violent men, easy women, flamboyant religiosity and dialect-heavy speech. Still, although it may be un-p.c. to say it, I’ve always had a soft spot for Porgy and Bess.
As a kid, I adored the 1959 movie because it was set in Charleston and the nearby islands where my family came from.  And it didn’t hurt that the movie seemed to have every black star working in Hollywood at the time: Sidney Poitier, Dorothy Dandridge, Sammy Davis, Jr., Diahann Carroll, Brock Peters and Pearl Bailey.
The music, of course, is gorgeous and it remains so, even if Paulus and Murray have cut more than an hour from the original score, reducing Gershwin’s nearly four-hour opera to a tidy two-and-a-half hour show (click here to read Paulus’ explanation for why they did what they did).
But all the standards are still there: “Summertime,” “My Man’s Gone Now,” “Bess, You Is My Woman Now,” “I Got Plenty of Nothing” and “I Loves You Porgy,” the first adult song that burrowed into my soul and that moves me as much today as it did when my 8-year-old self would sneak into our living room and play it (quietly) over and over again on the family stereo.
The songs have been shuffled around a bit and in some cases reassigned in the new production. Most of the recitative has been changed into spoken dialog. And dialect has been toned down (“I Got Plenty O’ Nuttin’” is now “I Got Plenty of Nothing”).
Meanwhile, Porgy, the crippled beggar who falls for the local floozy Bess, no longer gets around in a goat cart but with a cane and a leg brace (I’m not sure why they made the last change unless goats are hard to get nowadays or have become the new darlings of PETA). 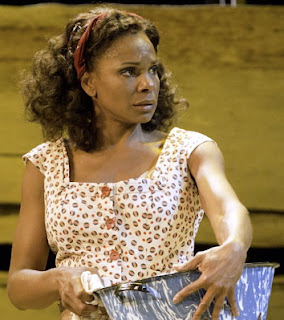 Most of the praise for the production has gone to the performances. Audra McDonald plays Bess and brings all her Audra McDonald-prowess— sensational voice, great acting chops—to the role (click here to read an interview with her). And yet she wasn’t a sassy enough Bess for me.
Norm Lewis, who plays Porgy, was out the night I saw the show and I groaned when the little slip of paper that fell out of my Playbill read “The Role of Porgy Will Be Played By NATHANIEL STAMPLEY.”  But, after a little nervousness that made his voice momentarily crack in his first number, Stampley turned in a winning performance. And since he’s a smaller guy than Lewis, seemed more physically right for the part.
The dandified Sporting Life (he used to be Sportin’) usually provides much of the show’s comic relief and David Alan Grier nails all the humor. But he also captures the malevolence that lies just beneath the bonhomie of this hustler, who deals drugs and is always around to tempt Bess.
Similarly, NaTasha Yvette Williams, a large woman who plays Mariah, the mother figure of the Catfish Row neighborhood, refuses to settle for easy, big-woman laughs and turns the character into a textured human being.
And Phillip Boykin makes a terrifically menacing Crown, the brute who is Bess’ lover (click here to read a profile ofhim). The duet between Boykin and McDonald is the best scene in the show.
Not everything works. I wish Riccardo Hernandez’s minimalist scenery had been a little less sleek.  When the action shifts to a nearby island for the picnic scene, a plain curtain is simply dropped over the stylized buildings of Catfish Row.  Couldn’t they at least have painted some trees on it?
I also wish Ronald K. Brown’s choreography had been more distinctive.  A family friend was a member of Brown’s dance company and so I’ve seen—and enjoyed—a good deal of his work over the years but he seems unsure of himself here. The moves don’t always fit what people would do at the moment he has them doing them.
But enough of the show works to make it worth your while to see this Porgy and Bess. There’s been no word about whether Sondheim has seen it. But I sure would love to know what he’d have to say about it.

I saw Porgy and Bess in its pre-Broadway tryout in Cambridge. I didn't know the music and I only knew a vague outline of the story. I felt so drawn in. (I even saw the alternate ending, before they changed it. Since I didn't know the original, I thought it worked.)

I thought Audra McDonald and Norm Lewis had terrific chemistry. My heart really went out to his Porgy, finding the love of his life. And Philip Boykin was incredible as Crown - so scary good. Joshua Henry was adorable. There was a real baby onstage and he sang A Woman is a Sometime Thing while holding the baby. My heart melted.

Anyway, I could go on, but as someone who'd never seen the opera, I really enjoyed it. Although I do agree that they could have done more with the set.