Crazy About "Diary of a Madman" 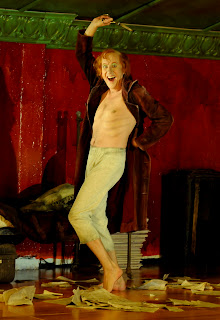 Sign me up for the Geoffrey Rush fan club.  And make that a lifetime membership, please.  Like most people, I discovered the off-beat Australian actor when I saw his breakout—and Oscar-winning—performance in the 1996 movie “Shine.” And over the years, I’ve enjoyed watching Rush in all kinds of movies from “Quills,” in which
he portrayed the licentious Marquis de Sade, to the “Pirates of the Caribbean” series, in which he plays the wicked Captain Barbossa.

But I really fell—and fell hard—for Rush when I saw him on stage two seasons ago in Exit the King. His final moment in that play is one of the most memorable things I’ve ever witnessed in a theater (click here to read my review). Now Rush is on the boards again in The Diary of a Madman, which is running at BAM’s Harvey Theatre only through March 12.

The Diary of a Madman is an adaptation of a short story by the 19th century Ukrainian writer Nikolai Gogol. It tracks the mental disintegration of a low-level government clerk named Poprishchin.  But that description doesn’t even begin to tell you about the extraordinary piece of work that Rush and his collaborators, writer David Holman and director Neil Armfield, have put together.

Longtime friends Armfield and Rush first began working on The Diary of a Madman back in 1989 and, as Armfield explains in a program note, “it was a show where as young artists we shut the doors of the rehearsal room and worked to please ourselves…we were just doing a show from our own sense of play and love of Daffy Duck and outrageous theatrical gesture.”
The result was a dazzling coup de théâtre in which an hilarious farce gradually spirals down into almost unbearable tragedy. It launched both their careers (Rush went into the movies and Armfield became artistic director of the Belvoir Street Theatre, one of Australia’s leading companies).  After seeing Rush’s amazing performance in this revival, I now want to see him in everything—Shakespeare, Chekhov, Albee and maybe some Dr. Seuss.
For Rush is, in the best sense of the term, a theatrical actor, the kind that flourished before Marlon Brando arrived with the Method, naturalism and all the just-like-real-life techniques that we now expect to see on a stage. But in the old days, actors embraced artifice—training their voices to fill a theater even when the script calls for a whisper and disciplining their bodies to convey emotion with the smallest of gestures.
Old masters like Laurence Olivier and John Gielgud had no patience for vanity and no fear of looking like fools. They threw themselves into their roles, be it king or clown. And they rejected the notion of a schism between art and entertainment, believing that both were worthy goals and could be achieved with the same performance.
Rush comes from that school of acting. The old-style techniques can come off as hammy in the wrong hands but he juggles them brilliantly (click here to read a Q&A he did with New York Magazine). And he is ably supported in The Diary of a Madman by Yael Stone, who goes toe-to-toe with Rush in three very different roles that are almost worth the price of the ticket on her own. They are backed up by Paul Cutlan and Erkki Veltheim, the two onstage musicians who speak through their instruments with similarly bravura virtuosity.
At the start of the play, Poprishchin, aided by Tess Schofield’s deliciously ridiculous costumes, is a pompous fool and all the more funny because he doesn’t know it. Rush turns 60 this year but I dare you to find a more agile actor working today and he uses his limber body to emphasize the character’s self-importance, twisting it and throwing it around Catherine Martin's smartly stylized set with the kind of flamboyant abandon that even a physical comedy genius like Buster Keaton might envy.
But Rush is just as affective at the play’s end, when Poprishchin has been stripped of everything, including the delusions that have buffered him from the prosaic cruelties of life.  “How can he go through that every night,” my theatergoing buddy Bill wondered as the lights came up at the end of the show.  I don’t know.  But I do know how very grateful I am to have gotten the chance to see Rush do it.  I’d urge you to see it too.  But I think the word has already gotten around and the run is sold out.

Labels: Diary of a Madman