Why "The Whipping Man" Was Painful for Me 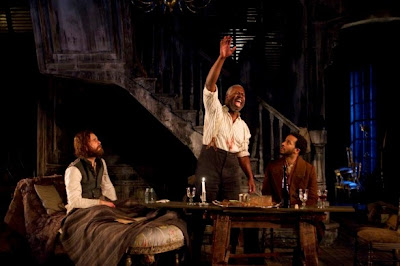 We’re closing in on the end of Black History Month.  And I suspect that the August Wilson estate has seen another big uptick in royalty receipts as theaters around the country marked the occasion by mounting one of the shows from Wilson's 10-play cycle chronicling the African-American experience.  In recent years, however, some companies have ventured beyond the Wilson canon, doing works by younger African-American playwrights like Lynn Nottage, author of the Pulitzer-Prize winning Ruined, and Tarell Alvin McCraney, the just 30 year-old wunderkind who created The Brother/Sister Plays.
Non-black playwrights have been getting in on the act too. I suspect that more than a few artistic directors fulfilled this year's obligation to diversity with productions of David Mamet’s Race or Bruce Norris’s Clybourne Park, which is currently running in London and a leading contender to take home an Olivier Award when those winners are announced next month.  And now The Whipping Man, a Civil War-era drama by Latino playwright Matthew Lopez, has taken up residence at the Manhattan Theatre Club’s Stage 1 at City Center.
My husband K and I had been eager to see The Whipping Man because K has a man crush on its star André Braugher. Because after we took a trip to Gettysburg a couple of years ago we both became Civil War junkies. And because despite the annual programming rites of February, the chance to see blacks onstage is still rare. But the story Lopez tells turns out to be both predictable and unbelievable.
The Whipping Man is set during the week in April, 1865 when Robert E. Lee surrenders the Confederate forces at Appomattox Court House and Abraham Lincoln is assassinated at Ford’s Theatre. Far away from these two cataclysmic events, two newly-emancipated slaves are guarding what remains of the ravaged plantation house where they once worked and hoping that when their former master returns he will honor the promise he gave to help them in their new life. But the family member who comes back is the master’s son Caleb, a rebel soldier who arrives badly wounded and bearing secrets.
Over the course of the play, the three men struggle to adjust to the new racial dynamics, reminisce about the past, try to imagine the future and, because the owners are Jews and have brought their slaves into the faith, celebrate a Passover seder, this time truly different from all other nights because the former slaves have just been released from bondage.
It’s an original and compelling premise.  But Lopez isn’t quite sure what to do with it. So he loads the play up with melodramatic plot twists.  He isn’t exactly sure how to treat the tar baby of race either. He brazenly takes on the n-word and calls one of the characters Nigger John. But, in a compensating nod to political correctness, he goes out of his way to say that the former slaves have always called Caleb by his first name instead of addressing him by the customary honorific master.
Similarly, Lopez describes the slave owners as so compassionate that they buy an orphaned slave child just to give him a home. Then he turns around and has them commit acts of brutality towards slaves we’re told they regard as family—the least of the cruelties turns out to be the floggings they pay the professional henchman of the title to deliver.
There could be a rhyme to the reason behind all of this (the capricious behavior of their masters is certainly a burden slaves had to bear) but director Doug Hughes fails to find it.  So he, too, goes for the melodrama, right down to the curtain that is pulled across the stage at the climactic end of each scene but that got stuck at the performance K and I saw.
Even Catherine Zuber’s costumes seem uncharacteristically off.  Nigger John, played with gusto but too much contemporary flair by André Holland, regularly scavenges from other abandoned homes in the area. He brings back food, wine, china place settings and clothes that all seem to fit him as though they were bespoke. Only John Lee Beatty’s set, complete with dripping roof, seems authentic.
The disappointment really stings when a play starts of with promise and a young playwright shows flashes of talent.  But not even seeing Braugher, a powerhouse actor and a clutch player on TV shows like “Homicide” and “Men of a Certain Age,” give his all as the older and seemingly wiser ex-slave Simon was able to make K or me feel much better.
But maybe the problem is the high aspirations I always have when I see a show about race.  Because the rest of the audience seemed quite please. The folks at StageGrade, the website that aggregates and averages the reviews of the top New York critics, have given it a solid B (click here to read what some of those critics have to say).   And the play has been extended through April 10, nine days before Passover.  So you'll just have to judge this one for yourself.