The Stars Align for this "Three Sisters" 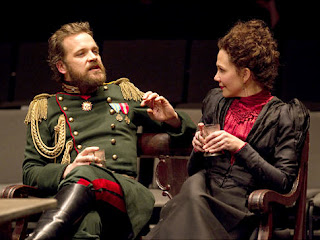 My hat is off   to Peter Sarsgaard   and Maggie Gyllenhaal.   He could be hauling in big bucks playing brooding superheroes in 3-D action movies and she sassy career girls in chick-flick romantic comedies. Instead, over the past two and a half years, they have taken to the boards to star in three far less-lucrative Chekhov plays, only one of them (the 2008 revival of The Seagull in which Sarsgaard played Trigorin) in the slightly higher-rent district of Broadway. The other two plays have been done down on 13th Street at Classic Stage Company. And each time out, the pair, married in real life, have dug deeper, honing their craft to the point that CSC’s current production of Three Sisters is a sold-out success, not just because it stars two Hollywood names but because the actors bearing those names are doing such good work.
As is the custom in Chekhov, Three Sisters is set in a large home in the Russian provinces. This one is occupied by the Prozorov siblings, who moved there from Moscow 11 years before the play begins when their military father was transferred to a new post. But the sisters and their feckless brother have never stopped yearning to return to the big city where they believe all their dreams of an exciting and fulfilling life will   come true.

Like its own siblings, Three Sisters is a piquant mix of the comic and the tragic, a notoriously tricky balance to achieve. The current production is directed by Austin Pendleton, who has acted in and directed Chekhov for over 40 years.  I wasn’t taken with the production of Uncle Vanya he did at CSC back in 2009, which seemed to wobble all over the place (click here to read my review) but Pendleton is a lot more surefooted this time out. And that’s despite some even greater challenges.
For starters, Paul Schmidt has come up with a translation chocked full of contemporary colloquialisms that more than occasionally grate the ear. Poor Marin Ireland as the shrewish sister-in-law Natasha gets stuck with some of the clunkiest anachronisms.
Meanwhile, the women playing the sisters—Jessica Hecht as the old-maid Olga (click here to read a Q&A she did with Theatermania) Gyllenhaal as the artistic middle sister Masha who is unhappily married to an older dullard, and Juliet Rylance as the youngest and most idealistic, Irina—have very different acting styles.  And, of course, the odd seating at CSC,  which puts the audience on three sides of the stage, places restrictions on the set and how the actors can move through it.
Yet, somehow it all falls together.  Walt Spangler anchors his simple but effective set around a huge farm table that’s large enough to accommodate a dozen or so of the actors at one seating and strong enough to serve several other functions as well.  Marco Piemontese’s costumes are equally elegant and Keith Parham lights it all beautifully.
Even Schmidt’s contemporary language seems to free the actors so that they speak less as if they’re trying to figure out new ways to declaim famous lines and more as though they are simply sharing intimate thoughts with another—and with those of us in the audience.
Similarly, the various acting styles turn what could have been misfortune into a virtue by underscoring the differences in both age and attitude among the sisters.  Sarsgaard is a bit too young to play Vershinin, the new military officer who knew the sisters as girls, and he gives an almost diffident spin to Vershinin’s adulterous love for Masha.  But Sarsgaard’s relative youth and fatalist approach work too, adding virility and poignancy to the scenes between him and Gyllenhaal (click here to read a brief piece on his feelings about working at CSC).
The rest of the company is affective too.  So affective, in fact, that even after nearly three hours, the audience has no desire to go to Moscow or anywhere else than right where it is.