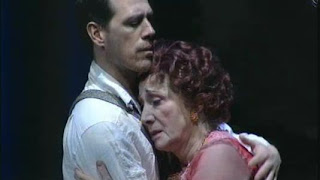 Tennessee Williams would have been 100 if he’d lived until March 26. Although the chances of the hard-drinking, drug-abusing Williams surviving that long were never great.  But he was, of course. And so theater companies around the world are mounting productions of his plays to celebrate his centennial.  It’s not just the classics like The Glass Menagerie and A Streetcar Named Desire that are getting done, but also the “lesser works” that came later in Williams’ career like The Milk Train Doesn’t Stop Here Anymore, which is running at the Roundabout Theatre Company’s Laura Pels Theatre through April 3.
Like so many of his works, The Milk Train Doesn’t Stop Here Anymore revolves around an aging southern belle who would rather live in her fantasies than face the harsh truths that the real world offers. In this telling of the tale, the ante is upped because our heroine, the rich, much-widowed and symbolically-named former actress Flora Goforth, is also terminally ill and afraid to die.
As much I love Williams (and I truly do) I’d never seen The Milk Train Doesn’t Stop Here Anymore, not even in the 1968 movie version "Boom" with Elizabeth Taylor and Richard Burton.  But my theatergoing buddy Bill had actually seen the show when it first opened in 1963 to dismal notices and so closed after only 69 performances.  And he saw it again when a revised version opened just a year later with Tallulah Bankhead taking over the lead role from Hermione Baddeley and fairing even worse since that production ran for a mere five performances.
Still, Bill was just as eager to see this new revival as I was.  The good notices that its leading lady Olympia Dukakis had earned when she played Mrs. Goforth at Hartford Stage a few years ago made it even more of a must-see.  But, alas, while Dukakis and the play pull out all the stops, neither is as successful as Bill or I had hoped.
Williams was in a tailspin during the time he worked on The Milk Train Doesn’t Stop Here Anymore.  He was no longer working with the great director Elia Kazan, who had helped shape the earlier plays. And his 15-year relationship with Frank Merlo, the great love of his life and another stabilizing force, was ending. Hopes of reconciliation were shattered when Merlo was diagnosed with lung cancer and died soon after.
So small wonder that Milk Train is such a bumpy ride. There are moments of the glorious old Tennessee—the lyricism, the romanticism, the unexpected bursts of humor, the underlying existential dread—but the play is hobbled by sketchy characters and silly situations. And the current production, directed by Michael Wilson, doesn’t offer much help.
Wilson, a lifelong Williams fan (click here to read a Q&A in which he talks about his feelings for the playwright),  directs a few of the set pieces well enough but has trouble maintaining a through line, which is essential in a play that moves back and forth between realism and fantasy.  He also makes some odd choices.  The oddest being casting Edward Hibbert as the character known as the Witch of Capri, who was originally played by a woman, and then allowing the actor to be as campy as he wants to be. Which turns out to be pretty damn campy.
The rest of the cast, including Darren Pettie, who plays the mysterious artist who makes his living as a gigolo and may also be the Angel of Death, seems to suffer from a lack of directorial guidance.  Which may explain why Dukakis seems to have decided to beat her own idiosyncratic path through the play.
In many ways, she gives a brave, almost bravura, performance but she can’t overcome the fact that she too is miscast—at least a decade too old and unable to radiate the kind of sensuousness that would make you believe the character was once a great seductress and movie star. Dukakis tries hard but there are moments when, dressed in David C. Woolar's unflattering costumes and unkindly lit by Rui Rita, that she reminded me of a drag queen version of Mae West.
Even so, the play—and the coming anniversary—have gotten me thinking about my fondest memories of Williams’ work.  One that popped to mind was seeing Sally Field as Amanda Wingfield in a production of The Glass Menagerie down at the Kennedy Center's Tennessee Williams Explored Festival back in 2004.

The Glass Menagerie is, famously, Williams' memory play but Field played that former belle as a real flesh-and-grit person—feisty, sometimes funny and determined to find a way to survive. And so when the gentleman caller she believes to be her last chance leaves, the disillusionment on the face of her Amanda was all the more affecting.
Now, I’d love to hear your favorite Williams memory.