"Lost in the Stars" Finds A Way to Shine 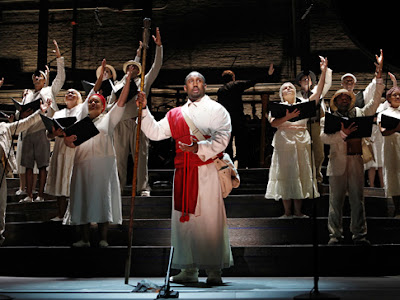 Despite the frigid weather, people milled around excitedly outside City Center on Wednesday evening. It’s always like that on the night before the latest Encores! production opens and family and friends of the cast and crew, along with theater insiders, are invited for an early peek at the new show. But the anticipation seemed cranked up a notch or two this week and I suspect that’s because the show is Lost in the Stars, Kurt Weill and Maxwell Anderson’s adaptation of “Cry, The Beloved Country,” Alan Paton’s celebrated 1948 novel set in pre-apartheid South Africa.
“I can hardly wait to hear that gorgeous score,” Michael John LaChiusa, himself the composer of such equally ambitious musicals as Marie Christine and The Wild Party, told my husband K and me when we chatted with him before making our way inside. Lost in the Stars is the kind of rarely-done show that people are always saying Encores! should do.  Although the original 1949 production starring Todd Duncan, who created the role of Porgy in Porgy and Bess, played for 281 performances, a 1972 revival with Brock Peters lasted for just 39 and the show hasn’t been seen on Broadway since.
As in the novel, the plot centers on two fathers. One is a black country minister who goes to Johannesburg to find his son who moved there to work in the mines but recently has fallen out of touch with his parents and in with the wrong crowd. The other is a white supporter of racial separation who is alienated from his more liberal son. Their stories intersect in an incident that caused the show's authors to label it a musical tragedy.
It was an audacious idea for a show when Lost in the Stars first debuted in a still-segregated America. The story might seem dated now when both South Africa and the U.S. have black presidents but director Gary Griffin, aided by Chase Brock’s understated choreography, has come up with a simple way to tell the tale that I found affective, especially in the staging of the Greek-style chorus that Anderson and Weill created to narrate and comment on the action.
I liked the music too. The score was the last one Weill completed for the stage before his premature death at just 50 and is a favorite of his fans. It’s operatic in scope but also manages to include references to native-African sounds (Weill reportedly sent to South Africa for recordings of Zulu music) without being heavy-handed about it.
Weill orchestrated the score for just 12 musicians and so, hewing to the creator’s original concept as it always does, Encores! has downsized the number of its players accordingly.  I missed seeing the full orchestra (of which K is an alumnus) fill the large City Center stage, but the playing, under the direction of Rob Berman, was as superb as always.
There are some lovely arias for the actors to perform. Chuck Cooper, who plays the minister, was still a bit stiff in the dramatic scenes (the Encores! casts don’t get that much rehearsal time) but he delivers on his big musical numbers. As does Quentin Earl Darrington, last seen as Coalhouse Walker Jr. in the critically-acclaimed but short-lived revival of Ragtime, here playing a character called Leader who heads the chorus. And young Jeremy Gumbs won the biggest applause of the night for an uptempo number he does in the second act.
Although he doesn’t have any solos, it was also good to see John Douglas Thompson in the role of the minister's cynical brother, a far cry from the classical roles like Othello and the Emperor Jones that have become Thompson's specialty. And Daniel Breaker, the star of Passing Strange and the original Donkey in Shrek, continues to show his versatility in a moving portrayal as the wayward son.
The first thing people tend to ask when you say you’ve seen an Encores! show is whether you think it will move to Broadway. I doubt this one will. But Lost in the Stars is an ideal Encores! show and one every true theater lover who can should see.  Although that may be tough to do since, as usual, the run will end on Sunday.

Thanks for the kind words! I'll definitely keep writing and I hope you'll keep reading too!!