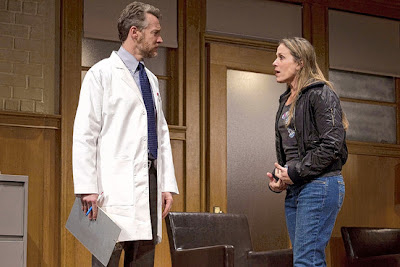 People I know keep asking me what I think about Good People, the new David Lindsay-Abaire play.  They don’t need my opinion to determine whether it’s, well, good because the show, now playing at the Manhattan Theatre Club’s Samuel J. Friedman Theatre, has already scored a B+ on StageGrade, including high marks from the New York Times.

Those glowing notices plus the movie-star sheen and innate coolness of Frances McDormand are causing the show to sell out.  And just yesterday, the producers added a three-week extension to the run, which will now end on May 29.
I think the real reason my friends and acquaintances are curious about my response is because they know my life story so closely resembles that of the character in the play who was a smart poor kid, won a scholarship to a prep school, went on to a good college (in my case Sarah Lawrence, which, as it happens, is also Lindsay-Abaire’s alma mater) and then moved away from the old neighborhood into a nice middle-class life.
Good People’s plot centers around an unexpected reunion that character, a doctor named Mike, has with an old friend named Margie (McDormand). They grew up together in the working-class and predominantly Irish neighborhood in Boston called Southie and had a brief fling in high school but haven’t seen one another in over 30 years.

Her life hasn’t turned out nearly as well as his. Her husband ran out on her years ago, she’s got a severely disabled grown daughter and, as the play opens, she’s being fired from her barely-above minimum wage job as a cashier in a dollar store.
Do the one-time friends still have anything in common? Why did he make it out while she didn’t?  Was it luck?  Or hard work? Does he have any obligation to help her out now?  Those are the questions Lindsay-Abaire, who himself grew up in Southie, asks in Good People and they’re ones I’ve also asked myself over the years when I’ve run into people I once knew when we were kids.
Questions about class differences don’t often make it into the theater nowadays—unless it’s a revival of some ‘20s-era farce about martini-swilling swells and their wisecracking servants—and there seems to be almost a ban against poor people appearing in plays. In fact, most contemporary plays are obsessed with the folks we used to call yuppies. So my hat is off to Lindsay-Abaire.  Even if some of his play doesn’t ring totally true for me.
Lindsay-Abaire clearly knows Southie better than I can ever hope to  (click here to listen to a terrific interview he did about his old neighborhood and his new play on the public radio show “Studio 360”) but in Good People he seems to me to be both patronizing towards and protective of the people he grew up with.

Maybe Southies are as crude and casually racist as he portrays them but his characterizations of them seemed to veer into stereotype. I found myself wondering what the people who still live in his old neighborhood might think of how he’s portrayed them onstage.
The playwright, who earned a Pulitzer Prize for his last play Rabbit Hole and some nice paychecks for his movie work, also seems more than a little embarrassed by his own success. I’ve been there and I feel for Lindsay-Abaire.  He doesn’t want to penalize Mike for his hard work but he doesn’t want to kick Margie for her hard luck. That leaves the play in a somewhat mushy middle, refusing to take a stand on either side.
The production, however, is rock solid. Good People has been sensitively staged by Daniel Sullivan, who after his similarly deft work with last year’s Time Stands Still is becoming one of my favorite directors. David Zinn’s costumes are spot-on. And John Lee Beatty outdoes himself with a marvelous turntable set that moves through five entirely different but fully realized and wholly believable settings from the church-basement bingo parlor where Margie and her friends hang out to the well-appointed living room in Mike’s suburban home.
The six-person cast is uniformly superb. McDormand, onstage throughout, makes you care about Margie even when she isn’t being a good person. Tate Donovan captures all the conflicting emotions that  a man like Mike might wrestle with. Becky Ann Baker, as Margie's best friend,  and Estelle Parsons, as her landlady, are a riot, and the source of much of the play’s leavening humor. While Patrick Carroll is sweetly earnest as the boss who fires but still admires Margie.
But the standout for me was Renée Elise Goldsberry, who gives a subtle but nuanced performance as Mike’s wife. In a nice touch, Lindsay-Abaire has made her African-American and, unlike Mike, she's second generation upper middle-class (her father is the doctor who was Mike's mentor).  She’s totally comfortable in her own skin and it’s really nice to see a black character who is affluent, well educated and unashamed of being either.
So this is what I think: Good People may not be a great play.  But it’s certainly good enough.