"Kin" Tells a Familial Tale, and a Familiar One 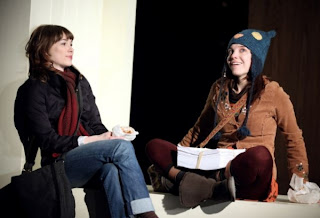 There’s a   lively debate currently going on within the theater blogosphere.  The subject is whether M.F.A. programs, writers’ workshops   and the need to satisfy subscription audiences have leached the individuality out of the plays that today’s playwrights under-40 are turning out.
“New wine in old bottles is how I'd sum up the preferred new-play product of most subscription theatres,” writes my always-thoughtful fellow blogger The Playgoer. “Writers who come up through the university system—and, perhaps, are reared on a diet of regional theatre and Broadway, too—are more likely to put out that kind of product.” (Click here to read more of what he has to say.)
The Playgoer’s words came to mind as I tried to sort out my feelings about Kin, the new show that opens at Playwrights Horizons later this month. I usually wait until a show has opened before posting my thoughts about it but the PH folks encourage us bloggers to get the word out early about their shows, so here goes.
There’s no question about the talent of Kin’s playwright Bathsheba Doran. And she's punched all the right tickets on the up-and-coming playwright's circuit.  She has an M.F.A. from Columbia University, was a playwright fellow at Juilliard and has developed work at the O’Neill Playwriting Center and the Sundance Institute Theatre Lab.
This is the first of Doran’s plays I’ve seen but it clearly shows off her eye for quirky characters and her ear for quippy dialog that makes the audience feel smarter just from hearing it. The thing is, Kin also seems like a lot of other new plays I’ve seen over the last few years.
The characters in these works tend to be smart, talented, good-looking and, while they’re not usually rich, they always seem to have enough money to live in chic homes, wear great-looking clothes, eat out all the time and drink a lot.

Yet, they’re unhappy.  They want their jobs to be more satisfying; their relationships too.  They don’t seem to care—or even notice—what’s going on in the rest of the world. Except for the chic homes part, you might call it the “Seinfeld” school of dramaturgy.
Kin, as its name suggests, is focused on kinship and the ways we relate to one another.  Its main characters are the unlikely couple of Anna, a poetry scholar; and Sean, an Irish immigrant who works as a personal trainer.

Like most modern couples they come into their relationship with baggage, including various troublesome friends and relatives, among whom are a distant father (hers), an agoraphobic mother (his), a wacky best friend (hers) and a wisecracking uncle (his).
As tends to be the case at Playwrights Horizons, the show is nicely cast.  Although the supporting characters held my attention more than the central pair. Suzanne Bertish brings a salt-of-the-earth poignancy to the mother.  Cotter Smith once again sensitively plays a reserved man who, similarly to the dad he played in Next Fall, can’t figure out how to show the love he feels for his adult child.
And Laura Heisler is an unabashed scene stealer as the best friend Helena. Doran has said that she originally planned to center the play around Helena but switched to Anna when that character began to interest her more (click here to read a piece she wrote about the genesis and development of the play).

Heisler seems not to have gotten the memo about the change and she keeps the spotlight on the neurotic Helena, turning her into a person you simultaneously laugh at and care about.
Some of the credit has to go to director Sam Gold, who did equally fine work with Annie Baker’s circle, mirror transformation, the breakout production at Playwrights Horizons last year. Here he almost manages to cover over some of the lapses of logic (during a scene set in North Carolina) and melodramatic turns (during some in Ireland) that occur during the play's 1 hour and 45 intermissionless minutes.
But Gold made a big misstep when he signed off on Paul Steinberg’s set for Kin: a big wooden frame that has to be dragged around the stage by the actors and some stagehands called in for extra muscle. Maybe they’ll get more adept at it with practice but, at the performance I attended, they seemed to have a hard time getting the thing to hit its marks.
Still, if you haven't seen a lot of new plays lately, this isn't a bad one to start with—and seeing it will catch you right up on the main preoccupations of today's young playwrights. But, if you go, do whatever you can to avoid sitting in the first few rows of the theater. Kin has an onstage rainstorm that had people in the first three or four rows shrinking into their seats and clutching their coats around them for protection. Luckily, that's one thing you won't find in every other new play.