"Hadestown" is a Helluva Fine Destination 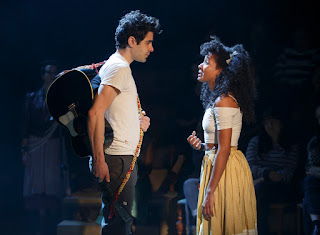 It's been a long time since I walked out of a musical and couldn't wait to hear the score again. Luckily, the singer-songwriter Anaïs Mitchell recorded a concept album for Hadestown, the new show running at New York Theatre Workshop through July 3. So I was able to call it up on Spotify and listen to her songs on my way home. They make a strong case that American roots music, not rock or rap, could be the future of the American musical.

The show is a sung through version of the story of the—many millennia spoiler alert—ill-fated lovers Orpheus and Eurydice, whose bond is put to the ultimate test when Eurydice is abducted by Hades, the god of the underworld, and Orpheus journeys into that hell to bring her back to the world of the living.

Mitchell and the ever-inventive director Rachel Chavkin, the recent Obie winner for The Royale who will make her Broadway debut this fall with Natasha, Pierre and the Great Comet of 1812, have transformed the song cycle into a theatrical piece that sticks close to the main storyline but they've added a down-home Louisiana vibe that is alternately sweet and peppery and deliciously satisfying (click here to read more about how they put the show together).

Michael Krass' costumes, Rachel Hauck's spare but appealingly rustic set and a few of the tunes (especially an Andrews Sisters-style number terrifically sung by the three-member ensemble who serve as the show's literal Greek chorus) suggest that the story is taking place in the late '30s or early '40s.

But there are also intonations of contemporary times with allusions to the growing tensions between the 1 percent and the rest of us and the rising threat of fascism (particularly in a number, written long before Donald Trump announced his candidacy, called "Why We Build the Wall" [click the orange button below to hear that track from the concept album])

In keeping with the show's classic and country themes, the theater's seating area has been reconfigured to resemble a coliseum, with a random assortment of straight-back wooden chairs and optional cushions. Beer is sold in a small bar at the entrance and can be carried to the seats. The seven-member band, which includes a trombone and a cello, plays onstage.

The multiracial cast (the men are white; most of the women black) is terrific, except for Damon Daunno's Orpheus who is charming but strains when his songs venture into falsetto, as so many contemporary songs for leading men now unfortunately seem to do.

But Nabiyah Be is both radiant and poignant as Eurydice. Meanwhile, Amber Gray, who played the fragile title character in Branden Jacobs-Jenkins' An Octoroon, is winningly sassy and sultry-voiced as Hades' wife Persephone.

And I knew I was in good hands, the moment I opened the program and saw that the barrel-voiced Patrick Page was playing the devilish Hades. There's no one better at adding a rainbow of colors to a character who in other hands would be monochromatic villain.

Best of all, however, is Chris Sullivan, who plays the world-weary narrator Hermes. Tall, burly and wearing a pork-pie hat, Sullivan doesn't resemble the classic image of the fleet-footed messenger of the gods but he is the charismatic soul of this show, singing bluesy tunes and underscoring the message that all love is an act of faith.