A "Peer Gynt" That Truly Lost Its Way 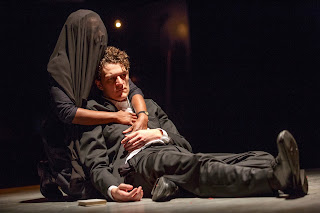 Sometimes I think John Doyle's middle name must be Minimalist. The British director made his reputation with small-scale productions of Stephen Sondheim musicals in which the actors played instruments, doubling as their own orchestra. Over the past decade, he's helmed 10 shows in New York, won a bunch of awards (including a Tony for his Sweeney Todd) and occasionally even used real pit musicians.

As the wife of a proud card-carrying member of the musician's union Local 802, I haven't been a big a fan of Doyle's work but even I've been won over by his spare but emotional take on The Color Purple, a frontrunner for this year's Tony for Best Revival of a Musical.
However, I'm back in the naysayer's corner with his latest venture: a stripped-down revival of Henrik Ibsen's Peer Gynt that is playing through June 19 at the Classic Stage Company, where Doyle will take over as artistic director in the fall.

I'd never before seen this Bildungsroman about a fool-hardy Norwegian peasant whose wanderings take him to China, Egypt, Morocco and other exotic locales where he mixes it up with kings, trolls, madmen and emissaries from the afterlife. Past productions have run as long as six-hours, were performed in verse and featured extravagant sets and costumes and a huge cast.

Doyle's version (he did the adaptation himself) runs two hours, plays out on a bare stage that's been set in the round and has a cast of just seven actors, all in sober, modern dress and some of them—yes—playing instruments.

It was the cast that initially drew me to the show. For it includes such stage MVPs as Becky Ann Baker, Dylan Baker, Quincy Tyler Bernstine and the incredibly versatile Gabriel Ebert, who throws himself body and soul into the title role.

They and their cast mates do manage to create a few beautiful moments. But there aren't enough of them to make for a satisfying whole. And even the play's famous "onion" scene underwhelms.

I'd read up on the play before seeing it and I knew it was a challenging work.The meandering tale is supposed to chronicle Gynt's search for his true self but Doyle's concept left me totally lost. And since there was no scenery to orient me and no costumes to signal when the actors were assuming different characters, I eventually gave up even trying to understand it.

On the other hand, my friend Ellie, a literature professor and former actress, was totally charmed. But you shouldn't have to come armed with a lit degree or an acting c.v. to enjoy a play.