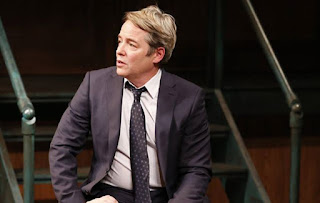 Now 54, Matthew Broderick made his stage debut as a teenager in the original 1982 production of Torch Song Trilogy, won a Tony Award the next year for his performance in Neil Simon's autobiographical Brighton Beach Memoirs and then another in 1995 for the revival of How to Succeed in Business Without Really Trying.

But, of course, it was his portrayal of the nebbishy accountant Leo Bloom in The Producers that turned Broderick into a Broadway legend. Alas, it also seemed to put a juju on him that turned his subsequent performances over the next 15 years into hollow specters of the Bloom character.

So it's great to be able to report that Broderick is almost back to his old form in the Irish Repertory Theatre's very satisfying revival of Conor McPherson's Shining City that will end a month-long-run next weekend.

Broderick plays John, a middle-aged Dublin widower so haunted by the car-crash death of the wife he didn't love that he can no longer sleep in the home they shared. He seeks help from a shrink named Ian, a former priest who has his own troubled relationship with the mother of his child (Lisa Dawn) and is just as unmoored as John, sleeping in his office and questioning his sexuality by picking up a male hustler (a nicely unsettling James Russell).

The shrink is really the main character and he's wonderfully portrayed by Billy Carter, a stage vet on both sides of the Atlantic and a frequent performer at the Irish Rep. He's captivating even when he's just sitting and listening.

But the patient John is still a meaty part. And while Broderick, rocking a believable Irish accent, doesn't move too far from the phlegmatic behavior that has marred his recent performances, he finds a way to put that lethargy to good—and effective—use here.

In fact, under the fussy-free direction of the Irish Rep's producing director Ciarán O'Reilly, the role seems to be almost therapeutic for Broderick, his vitality visibly returning just as the recovering John's does (click here to read an interview with the actor).

The result is that the performance—and the play that surrounds it—is a wonderful way for the Irish Rep to celebrate its newly renovated home (better sight lines, more comfortable seats, additional bathrooms) and to mark what could be the beginning of a renaissance for Broderick's career.

Saw this for the second time last night. First time was in early previews. I think there was an overwhelming feeling in the audience that Broderick surpassed anything he has ever done on stage, even in his youth. People I spoke to afterward appeared to be shocked by the depth of his performance. He was truly magnificent in this role showing a range of emotions and still managing to find the humor in the words and break up the anguish with some comic relief (typical Irish mechanism). It's too bad that more people could not see this due to the limited run and seating. Maybe it was the intimate setting in an off-Broadway theatre or the material itself, but whatever it was, it worked. Actually the entire production was outstanding. Bravo Irish Rep!

I was so sorry to read, yesterday, that Shuffle Along will close in July when Audra McDonald leaves the show to have her baby. I was also rather shocked. It seems to me that the show has been doing excellent business both pre- and post-Tony Awards. Ninety-nine percent attendance most weeks and sometimes over one hundred percent. Will Audra's departure really make that much difference? Yes, she is supremely talented and wonderful in the role, but so are the other members of this exquisite cast.

I loved this show. I've never seen another like it. It was interesting, informative, educational and challenging. And never less than thoroughly entertaining. I feel sorry for all the people who will never get to experience this fascinating story, these amazing performances, George C. Wolfe's consummate writing and direction and Savion Glover's brilliant choreography.