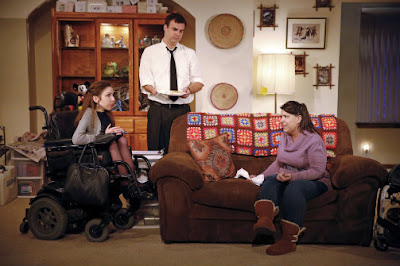 Outsiders are Samuel D. Hunter's specialty. But his aren't the heroic or charismatic figures that command center stage in most narratives. Instead, they are the more commonplace misfits society has pushed to the margins because they're disabled, gay (The Few), obese (The Whale) poor (Pocatello) or, among the secular, religious (all Hunter's plays).

So it made perfect sense for Theater Breaking Through Barriers, a company devoted to using actors with physical disabilities, to commission a new play from Hunter. The result is The Healing, an affecting meditation on faith, friendship and forgiveness that is running at The Clurman Theatre through July 16.

The Healing opens in a tchotchke-filled house in a small town in Idaho, Hunter's home state. It's the home of a woman named Zoe, who, having no family or close friends, kept herself company by ordering things from the Home Shopping Network but recently committed suicide by lying down in the snow and freezing to death.

The people who gather to mourn her passing and pack up her belongings are friends she met years ago when they all attended a Christian Science summer camp, whose director, like the notorious gay conversion programs, told the kids with disabilities they could change their conditions if they prayed hard enough.

Zoe's closest friend Sharon, a feisty wheelchair bound girl, eventually rebelled and lead a campaign that closed the camp. But the experiences there marked each of them and their cabin-mates even more than the disabilities they were born with.

Hunter and director Stella Powell-Jones sift through the emotional damage with great sensitivity. The cast, composed of both abled-bodied and disabled actors (some of whose disabilities are less obvious than others) is uniformly excellent. But Shannon DeVido, who plays the sharp-tongued Sharon, is a standout.

That's in part because DeVido gets most of the funniest lines (Hunter always leavens his serious subject matter with large dollops of humor ) but also because she's so good at conveying both the pain and compassion that Sharon hides beneath her veneer of cynicism. Casting directors should be finding parts for DeVido, whether they're written for someone in a wheelchair or not.

There's a not-exactly surprise twist that comes toward the end of the show's 90 minutes but the survivors' struggle to get there is still moving—and worth seeing.