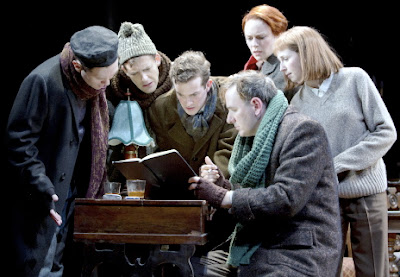 The true story that inspired February House, the new musical at the Public Theater, is so cool that I couldn’t wait to see the show. Here it is: in the early ‘40s, a group of artists that included the poet W.H. Auden, the fiction writer Carson McCullers, the composer Benjamin Britten, the tenor Peter Pears and the stripper extraordinaire Gypsy Rose Lee all lived together in a rundown Brooklyn Heights boarding house.

Their communal living venture, nicknamed for the fact that several of the residents had birthdays in February, lasted for just a year and the house was eventually torn down. But it made me smile every time I thought about what it must have been like to live there (click here to read a fascinating history about the place).

I suppose Gabriel Kahane, who wrote the music and lyrics for February House, and Seth Bockley, who wrote its book, must have had similar thoughts.  The problem is that they seem not to have had any thoughts beyond that.

The result is that their February House is nearly three long hours of missed opportunity.  Or, to put it as the woman sitting behind my theatergoing buddy Bill and me complained several times to her friend, “It’s not a good show.”

The central character is the real-life editor and flamboyant man-about- town George Davis who seems to have known everybody who was anybody and so the dialog gives him lines like “This is my friend Carson McCullers, the novelist.”  It’s always a challenge for biopics and bioplays to come up with smart ways to let the audience know which famous person an actor is playing but that isn't even trying.

Kahane has said that he wanted to give each character a musical style that would evoke his or her background and personality (you know, Americana for McCullers, art song for Auden, show tune for Gypsy, operetta for the lovers Britten and Pears).  It’s a clever conceit (click here to read more about it) but Kahane, who did his own orchestrations, is never able to meld them into one harmonious whole.

Perhaps he should have borrowed an idea from The Book of Mormon and started the show off with a “Hello!” style opening number in which each resident is introduced, moves into the house and expresses what he or she wants to get out of it.  Or maybe not because the show’s lyrics, with the exception of an Auden poem set to music, are so flatfooted that the actors almost tripped over them.

Bockley does the actors no favors either. In his hands, each of the celebrated residents comes across as no more than a personality tic: quirky Carson, ballsy Gypsy, lovelorn Auden.  And he doesn’t give them anything to do, except sit around and whine about the food, the lack of heat and, God help us, bed bugs.

I haven’t read the book on which the show is based (click here to learn more about it) but there would seem to be all kinds of possible plot lines.  Bockley samples a few—the inevitable rivalries and jealousies that develop in such an artistic hothouse; the oasis that February House provided for its many gay inhabitants during those homophobic times; the guilt its residents, many of them European exiles, felt as their homelands descended into war—but he doesn’t fully develop any of them.

Actors in this city are used to loading deadweight material on their backs and hauling it up to an acceptable level of entertainment but the burden here is too great and even the strongest cast members—Kristen Sieh as McCullers, Erik Lochtefeld as Auden, Kacie Sheik as Gypsy—wobbled from time to time.