Did the Tony Broadcast Do Its Job? 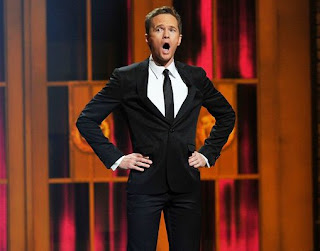 Lots of people are upset because Sunday night’s Tony Awards drew only 6 million viewers, a big drop from the 6.9 million who tuned in last year. I could try to put a positive on that by pointing out that only half as many people (2.7 million) watched the season finale of “Mad Men” but that show’s ratings are rising, particularly among the chattering classes who determine what’s cool, so the comparison probably won’t make anyone feel better.

Still, all in all, it was a good Tony show. Host Neil Patrick Harris was his usual charming self. There were some surprises (James Corden pulling out an upset win over Philip Seymour Hoffman for Best Actor in a Play and The Gershwins’ Porgy and Bess trumping Stephen Sondheim’s Follies for Best Revival of a Musical).

And there were some nice speeches (particularly Steve Kazee and Judy Kaye’s tributes to parents who have recently died. Click here to listen to them and to other speeches,  here to see the entire broadcast and here for the official list of all the winners.

There have been some nice wrap-ups about the broadcast too.  And you can click here and here to read a couple of my favorites).

But I’ve got other fish to fry in this post.  Because let’s face it, while the job of the Tony voters is to celebrate the artistry of Broadway, the job of the Tony broadcast is to sell the shows, particularly the musicals, to as wide an audience as possible. Broadway producers—and those of the broadcast itself—are getting bolder about fessing up to that.  Although I’m not sure they’re getting better at doing it.

In the past, a show had to earn a Tony nomination in order to qualify for a spot on the telecast but the producers have been widening the club in past years and they threw the doors open almost completely on Sunday:  every musical this season, except for poor Spider-Man—the Rodney Dangerfield of Broadway shows—got  a chance to strut its stuff.  There was even a controversial presentation from a cruise ship production of Hairspray, courtesy of Royal Caribbean, one of the broadcast sponsors.

But the coveted opening spot went to The Book of Mormon, which is not only a show from last season but certainly doesn’t need any help selling tickets (it sold out 102% of its capacity last week).  Still, putting it at the top of the broadcast may have been a smart decision, judging by the performances that the other shows offered.

Exposure on the Tonys is cheaper than buying an ad to reach a similar number of people would be and surveys have shown that viewers like to see numbers from the shows and really do use them to determine which ones to see. So a lot of thought goes into what will convey the essence of each show and make people willing to pay money to see more of it.

Broadway insiders like to tell stories about low-grossing shows that had their fortunes turned around by a great performance on the Tonys. Last week, Ken Davenport, the producer of Godspell, which has been playing to only half-full houses of heavily discounted seats, admitted that the show’s future was riding on the response to its appearance on the broadcast.  That response turned out to be not so good.  Yesterday, Davenport announced the show would close on June 24.

But very few of the performances came off well. What explodes on the stage can sometimes come across as a whimper on the TV screen. The dynamic dancing in Newsies has people cheering in the theater but you wouldn't have known that from what came across on TV.

Maybe it’s the fault of Glenn Weiss, who directed the telecast, but the dancers looked as nimble as Newsies' crippled character Crutchie as the camera zoomed in and panned out on them in a herky-jerky fashion.

Ghost did itself no favors either.  In fact, I imagined viewers at home turning to one another and asking, “What the hell is going on?”  They probably felt almost as confused by the Follies number in which Danny Burstein performed a somewhat frantic version of "The God-Why-Don't-You-Love-Me Blues."

Evita's producers put their money, yet again, on the allure of Ricky Martin and pointedly did Che's "And the Money Kept Rolling In" number so Evita didn't get to sing at all in the Evita sequence.

The folks at Porgy and Bess decided not to recreate just one number but to do a quick succession of excerpts from several songs that viewers would recognize— “Summertime,” “It Ain’t Necessarily So” and “Bess, You Is My Woman Now."

Some critics didn't like that approach but I thought the  segment played like a smart movie trailer and I bet it would have paid off at the box office even if P&B hadn’t won the Best Revival prize. As is, the show, which had been chugging along at three quarters full, reportedly saw its ticket sales jump 50% on Monday.

Meanwhile, Once, the winner of the Best Musical honors, saw its ticket sales multiply five-fold even though it had already been playing to full houses.  As it ever was and ever will be, success sells.

I wondered if the lead off with the Book of Mormon was more of a political statement than a theatrical one to poke fun at Mitt Romney. OR if it was a statement about the lack of a real blockbuster musical this season. Either way, I enjoyed it. I always watch the Tonys to see what's new in theatre and although I may never make it to see the show on Broadway, I may see the touring version or see a local theatre version or even purchase the CD.

Thanks you leaving such a thoughtful comment, Heather. I hadn't thought about the political angle, which is interesting. And, although I don't think I came right out and said it, I enjoyed the show too.

I also enjoyed the show overall, though I was disappointed that they forced Danny Burstein to fit a 10-pound song into a five-pound sack. And the "Porgy and Bess" segment was jarring; when I heard that the new orchestration sounded like a television variety show, I fast-forwarded past it (thank you, DVR).

Hey Jon. I think the big challenge for the show is figuring out how to cater to both Broadway regulars and to other people who may only see a couple of shows a year and tune in to see which ones those should be. I think the Porgy and Bess segment worked for the latter group and so in that sense, I think it did its job. And luckily, there are DVRs for the former group. Thanks, as always, for the comment.

This is a great blog! I really like your honesty. Last years Tony's were great. This year was good but not outstanding. I'm so glad Christian Borle won for Peter and the Starcatcher but I was a little disappointed with some of the other winners.

My theory is that when there's a hit show everybody wants to preview, the Tonys get bigger numbers. When there's a lackluster season (for musicals), or a season with a lot of small shows, the ratings go down. Somebody could do the research on this and prove it, but I would bet the years the Producers and Wicked were up, the numbers were as good as last year (for Mormon). The tide raises all the boats, as it were. Doesn't matter how many stars you get to present or how much . . . filler . . . you pump into the show.

You raise a good point, Mark. It's the same with all awards shows, be it the Tonys or the Oscars. That's why the Oscar folks increased the number of films that can be eligible for Best Movie so that some blockbusters could get on the list and the broadcast could draw in more viewers.

I'm not suggesting that's what the Tonys should do. But I think it's a reality that the general viewers want to have a rooting interest when they tune in and that usually translates into wanting to see the shows they've heard the most about.

Bartley, thanks so much for your very kind words.

I don't think any of us is ever happy with all the winners but the nominees this year were really strong and so I don't feel as though anyone was unfairly rewarded.