Why "Seminar" Gets a Failing Grade From Me 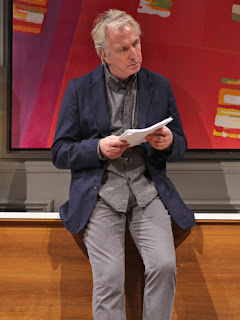 My good friend Andrea recently came to New York for the first time in four years and, of course, she wanted to see a Broadway show.  After some research— reading the Times and talking to me—she settled on Theresa Rebeck’s new comedy Seminar, largely because she’s such a big fan of its star Alan Rickman. Alas, while she did enjoy seeing him, Andrea ended up disappointed with the play.  Ditto for me.
Seminar, which is playing at the Golden Theatre thru March 18, stars Rickman as an erstwhile literary lion who is running a private master class for four young writers. Each has paid $5,000 for the privilege but his pedagogical approach is mostly dismissive put-downs.
It’s a perfect role for Rickman’s trademark acerbity and he tosses off the one liners with the same hard-hearted ease that the Republicans have been using to discard frontrunners. He gets able support from his co-stars: Hamish Linklater, Jerry O’Connell, Hettienne Park and Lily Rabe, who just seems to get more and more impressive each time she walks on a stage.
Sam Gold, the deservedly hot director of the moment, applies his usual verve to the proceedings. And the entire design team steps up as well, particularly David Zinn, who’s created two very different New York apartments, both of which I wanted to move into immediately.
So what, you may be asking, made Andrea and me unhappy? Well, the only thing left is the play itself.  And I'm sorry to have to say that Seminar is the latest in a long string of disappointments by the prolific Rebeck, who comes up with appealing scenarios for her plays and then fails to develop them fully enough.
The set-up for Seminar is similar to the one that Terrence McNally used for Master Class, his play about the opera diva Maria Callas: genius teacher amusingly humiliates and then satisfyingly uplifts talented students.
But while McNally provided glimpses into Callas’ life that allowed the audience to understand what drove her, Rebeck stays on the surface. Her characters do things because the play needs them to, not because the characters need to do them.
Some feminists have gotten particularly pissed off with Rebeck because of the way the play treats its female characters.  And, indeed, there is one bit of business early in the play that makes no sense, other than to get a smutty laugh. (Click here to read one complaint and here to read another).
The critical response to the show has been mixed but it’s still managed to get a B+ on StageGrade, the site that aggregates the reviews of the top New York critics (click here to read some what some of them have to say).
But Andrea’s experience reminded me that those of lucky enough to see lots of shows (professional critics average well over 200 a year) can afford to be more forgiving. Or maybe writers just like shows about writers.
So, if you’re not a writer or a really rabid Rickman fan, and are coming to town with just enough time to see one or two shows, this probably shouldn’t be one of them.

The play is a lot better written than this "review"

Thanks for taking the time to leave a comment, although I wish you'd said a little more about why you liked the show. Or even why you didn't like what I wrote about it.