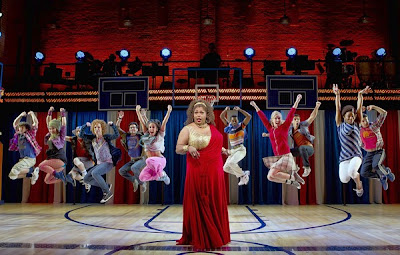 Despite recent balmy temperatures, the winter frost is beginning to settle in. The new year isn't even a week old and two shows have already announced that they’re folding their tents because they’re not strong enough to withstand the cold box-office months of January and February when the holiday tourists have gone home and New Yorkers customarily hibernate in theirs or only venture out for exotic fare, like the Public Theater's Under the Radar festival (click here to find out more about it).
The first Broadway show to go is Lysistrata Jones, the updated spin on Aristophanes' 5th century comedy about a group of women who decide to deny their men sex until they end The Peloponnesian War.  Only in this musical version—with a book by Douglas Carter Beane and music and lyrics by his husband Lewis Flinn—the women are co-eds who, in the lyrics of one song, are “giving up giving it up” until their basketball player boyfriends break a years-long loosing streak and win a game.
Lysistrata Jones was a surprise hit when the Transport Group presented it, appropriately enough, in The Gym at Judson Memorial Church last spring and it made a relatively quick leap to the Walter Kerr Theatre last month—and brought along some fans with it.
Chief among the cheerleaders was the New York Times’ Ben Brantley who proclaimed it an “endearingly escapist show” (click here to read his entire review.)  My blogger buddy The Mick over at The Craptacular loved it too (click here to read her rave).  I didn’t see the downtown production but the Broadway transfer was a low scorer for me.
Flinn’s tunes are suitably peppy and Dan Knechtges, who directed and choreographed the show, gives the young energetic cast a real workout. Patti Murin, who plays the title character is particularly perky (click here to read a piece about her).
And the show’s be-the-best-that-you-can-be motivational message comes through loud and clear. But it's all been done before—and better—in Disney’s “High School Musical” series.
Most of the technical fouls are committed by Beane. He can be sharp and witty as he was in As Bees in Honey Drown and The Little Dog Laughed or comically indolent as he was in Mr. & Mrs. Fitch and is, alas, here. The laughs in Lysistrata Jones rely far too much on the scatological (or as The Mick says, dick jokes) campy pop-cultural references and a cheap use of cultural stereotypes.
Lysistrata Jones gets points for having one of the most diverse casts I’ve seen on Broadway in a long time (even if the cute blonde is inevitably the main character) but it undermines the good deed by doing things like having the Latino characters mangle their English. Beane uses the same tired trope for one of the characters in his book for Sister Act. This hasn't been fresh since Ricky Ricardo's day.
The show also makes the narrator a big finger-waggling-neck-swiveling black woman. Liz Mikel is very good in the role (the audience loved her the night my theatergoing buddy Bill and I saw the show) and I’m sure she's grateful for the job but I couldn’t help feeling badly that someone as talented as she is was reduced to this modern-day version of hambone.
Beane obviously gets a kick out of mixing it up with the Greeks. He (and a lot of people, although, again, not me) had a lot of fun with his update of the toga-heavy Xanadu, which played over 500 performances four seasons ago (click here to read what I thought of that one) and he was, no doubt, hoping for a repeat of that success.
But the Fates had other plans.  When it closes tomorrow, Lysistrata Jones will have played just 30 performances.

Hi, I've just started following your blog here. I wanted to see it before it closes. I don't feel so bad now for missing it. Thank you for the review.

Hey, thanks for reading and I hope you'll continue to do so. The spring season is already filling up with lots of news shows so that should give us both the opportunity to see some good ones.