"Outside People" Tackles a Very "In" Topic 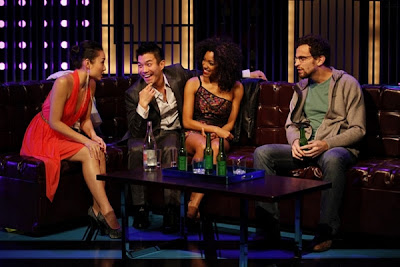 The Soviet Union was the bogeyman that threatened what Superman used to call “The American way” when I was a kid.  It lost the gig when the Berlin Wall fell in 1989.  Since then, Iraq, Iran and North Korea have been auditioned for the role. But increasingly China has become the hands-down favorite to play the part.  Which may explain why this season has already brought us two plays about the culture clash between the U.S. and China.
The first was David Henry Hwang’s Ch’ing•lish (click here to read my review) which is limping along on Broadway with houses that are barely a third full. The latest arrival is the Naked Angels production of Outside People, which opened last night at the Vineyard Theatre.
Outside People is like the friskier younger sister of Ch’ing•lish.  It’s sexier and more fun and it deserves to do better business.
In both plays, guileless white guys travel to China, seeking to reset lives that have veered off the track. There they meet and fall in love with beautiful and (old stereotypes die hard) inscrutable Chinese women.
The guy in Outside People is Malcolm, a nebbishy twentysomething who’s kicked around aimlessly in the years since graduating from Stanford and so gratefully accepts an offer from his far slicker former Chinese roommate David, or Da Wei, to take a job as “The Token White Guy” with a company in Beijing (click here to read a piece about that real-world practice).
The play opens in a trendy club where the friends have gone to celebrate Malcolm’s first night in town with Da Wei’s girlfriend Samanya, the daughter of a Cameroonian diplomat who grew up in China and feels more Chinese than African, and Xiao Mei, a Chinese woman who  hooks up with Malcolm suspiciously quickly.
Like Ch’ing•lish, parts of Outside People are performed in Mandarin but, unlike the Broadway production, there are no projected translations here.  And somehow the dislocation that produces feels right as the audience struggles to figure out what’s going on just as Malcolm does.
Alas, playwright Zayd Dohrn soft pedals the conflict and refuses to draw conclusions. It’s a trend that’s become annoyingly popular and not just in theater (click here to see an L.A. Times piece on its use in the movies).
Here, the ending is left hanging in the air to the point that the audience the night my theatergoing buddy Bill and I saw the show didn’t realize the play was over and was clearly waiting for more to happen when the actors appeared onstage to take their curtain-call bows.
All four actors are excellent under Evan Cabnet’s sure-handed direction.  Although Li Jun Li may have the heaviest lifting to do as Xiao Mei since Dohrn gives her such inconsistent stuff to play: one minute, the character’s English is supposedly so weak that she can barely order a drink but then, the next minute, she’s delineating the difference between freedom in the two countries.  Somehow, Li, who played Liat in the recent revival of South Pacific, manages to make nearly all the moments believable.
The technical aspects of the show are equally nimble. The women look so fabulous in the form-fitting outfits costume designer Jessica Wegener Shay has put them in that you’ll want to sign up for Pilates as soon as you leave the theater.
The fluid set by Takeshi Kata and cinematic lighting by Ben Stanton are spot on too.  And the music—a playlist that roams from American pop to movie-score Chinoiserie, to Mandarin hip-hop—slyly underscores the changing dynamics.
Outside People may be an imperfect play but it’s still an enjoyable way to start off the year. May a thousand similar theatrical flowers bloom.

Hey check out (and like) an awesome video interview with the talented playwright of the Broadway play "Chinglish" David Henry Hwang at: http://culturecatch.com/vidcast/david-henry-hwang