A "Richard III" That Just Limps Along 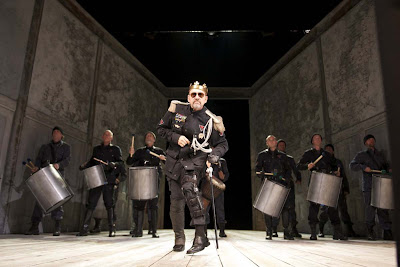 People have been going to the theater to see stars since Thespis broke out of the chorus in the 6th century, barnstormed the cities of ancient Greece and gave his name to the acting profession that he is credited with creating.  And I’m just as eager to see a star onstage as generations of theater lovers have been ever since.
So, despite having seen Richard III more than a half dozen times over the last 10 years, I signed up for the entire season at BAM just to make sure I didn’t miss out on getting a ticket to see Kevin Spacey put his trademark sardonic spin on the most wicked—and most wickedly entertaining—of Shakespeare’s villains.
The production that opened at the Harvey Theater last week marks a reunion between Spacey and the director Sam Mendes, who not only worked with the star on the 1999 Oscar-winning movie "American Beauty" but is the guiding force behind The Bridge Project, the transatlantic partnership that has brought British and American actors together to perform classic works.
Richard III is the final of the Bridge productions and the Spacey-Mendes take on the tale of the hunchbacked miscreant who manipulates the deaths of his brother, nephews and wife to gain the throne of England has drawn raves in London and here (click here to see some of those reviews).

But, as was the case with the initial Bridge production The Cherry Orchard back in 2009 (click here to see my review) the show failed to work for me.
It gets off to a good start with the sight of Spacey sprawled on a throne. Clearly pissed off by the celebration going on around him as his elder brother gets the crown (or, to be more accurate, the celebration that is being projected on the screen above him) Spacey's Richard snarls out the play’s famous opening line, “Now is the winter of our discontent/Made glorious summer by this sun of York..”
Spacey never loses his prodigious intensity but the energy around him quickly dissipates and although, as I’ve said, I’ve seen the play a lot, it was hard to follow what was going on.
Mendes clearly means to comment on the nefarious ways in which political leaders use the media to manipulate the masses but, ironically, he seems to have put more thought into coming up with ways to use video projections than in developing his theme.
His other choices are just as off the mark.  It’s become uncool to do Shakespeare in period dress and so he has designer Catherine Zuber put all the men in chic Mad Men-era suits and contemporary military garb.

They look great but they also all look alike.  So, despite the decision to project the names of the major characters on a screen as they appear onstage, it’s hard to tell who is whom or on whose side.
Paul Pyant’s lighting doesn’t help either.  I thought he and Mendes might have been making a point when the spotlight failed to illuminate an actor until he was almost finished speaking but after it happened a few more times, I decided that even if the choice had been intentional, it was annoying, particularly in such a large house.
The sound design went in the opposite—and more emphatic—direction. Two percussionists played big Japanese taiko-like drums to punctuate the action and at various times, the actors strapped on drums and beat along (John Doyle-style) with them.

This, too, is stylish—and it helps to keep the audience awake—but it also drowns out the dialog, which is already compromised in the acoustics-challenged space of the Harvey.
But, I hear you thinking, isn’t it worth it to put up with all of that just for the chance to see Spacey in the flesh?  Well, I’m not sure it is. He certainly goes all out, which, with Spacey, is saying something.

The brace he wears and the limp he affects as the crippled Richard made me worry about his future orthopedic health. But the inner life of the character isn't as sharply delineated and it was never clear why anyone would believe or trust this twisted Richard.
Besides, even a star of Spacey’s magnitude needs some help, particularly in a production that runs three-and-a half hours. Back in 1955 when Laurence Oliver, filmed my all-time favorite version of Richard III, he was wise enough to recruit a supporting cast that included John Gielgud, Ralph Richardson and Claire Bloom.
Of course, you don’t always have to have big names to make a good production.  When Classic Stage Company did Richard III five years ago, Michael Cumpsty lead a cast filled with CSC regulars and that production was funny, moving and memorable (click here to read my review).

None of which, alas, I can say about the current one.  In fact, I was so disappointed by it, that for the first time I can remember, I left my Playbill at the theater.