Tips on the Most Apt Apps for Theater Lovers 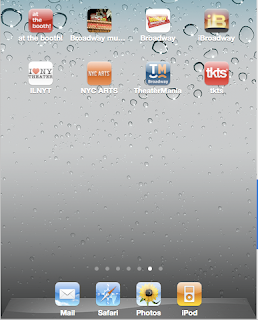 Like most new smartphone and tablet users, I’ve been loading up on apps since I got my iPad at the beginning of the summer. And, of course, I downloaded a bunch of theater-related ones.  The time I took off from blogging over the past couple of weeks gave me a chance to put them through their paces and I had planned to use this return post to tell you what I thought of them. Then I saw a similar piece in the New York Times this past Sunday and had second thoughts about doing my reviews. But my husband K, always my biggest booster, urged me to write them anyway. And I’m hoping they will still be useful since I sampled more apps than the Times mentioned and since its writer seemed more interested in the rivalry between two app sponsors than in how much the applications might satisfy the needs of us theater junkies.  So here’s the real lowdown on which to download:
1. I♥NYTheater
It’s hard to beat this app, which is sponsored by The Broadway League, whose members include the major producers, theater owners and operators.  The application is elegant to look at, easy to use and includes everything anyone could possibly want to know—show descriptions, casts, playing schedules, ticket prices, running times, theater locations, video clips and links to Facebook pages, Twitter feeds and YouTube channels—about all the current Broadway productions.  And, of course, you can use the app to buy your tickets. There are also handy links to hotels and restaurants in the Theater District.  And I’m particularly fond of the feature that lists the current week’s curtain times for all the shows; it’s really handy as more producers get creative about when they start their shows.
2. Broadway World.com
Most of the theater-related apps seem to work best on cellphone screens and only pop up as small rectangular boxes on tablets like the iPad. But the biggest theater site on the internet has configured its app to take full advantage of the IPad’s larger screen. And it has all kinds of bells and whistles but, alas, not all of all of them work as well as they should.  It took me a gazillion clicks to get the “Regional News” button to respond and even then I wasn’t able to access the listings for the non-New York locales. But you’ll have no problems if you stick to Broadway fare. In addition to basic info about all the shows on the main stem, there's access to the Broadway World message board and a nifty feature called “Pick a Broadway Show,” which allows you to mix and match descriptions like “Perfect First Show” or “Rock and Roll Score” and then have the app suggest which productions will best fit your bill.
3. TKTS
Created as a sibling to the Theatre Development Fund’s discount ticket booth in Times Square, this app gives users a continually updated heads-up on which Broadway and off-Broadway shows are available at the booth and the size of the discount for their tickets.  In addition to the standard details about theater locations, performance schedules and running times, the app also provides useful info on things like wheelchair accessibility and where you can find the restrooms in each theater.  Plus you can read the stories that appear in TDF’s online magazine Stages, which, full disclosure, recently published a story by me.
4. NYC ARTS
Although it isn’t strictly a theater app since it covers all kinds of art events in New York, this is the first arts-related app I downloaded and remains one of my favorites.  It’s developed by the Alliance for the Arts to encourage people to sample more of the city’s cultural offerings.  You can browse by category (everything from concerts to walking tours, and, of course, theater)  location (some 50 neighborhoods spread across all five boroughs) or organization (most of the major theater companies are listed, as is the Theater Row complex on 42nd Street). But what I like best is that if you turn on your device’s location services function, the app will list all the events that are within a mile radius of where you are.  It’s a great way to discover off-the-beaten-track options.
5. Theatermania
This app, sponsored by the popular theater news website, only covers the basics—brief synopses of the shows, playing times, ticket prices and the addresses of the theaters where the shows are playing—but it does that for the 11 theater-friendliest cities across the country and for London too. There’s also a Google Maps function that’s supposed to display shows nearest your current location but my experience suggests that only means theaters that are no more than a mile away because my map doesn’t show Lincoln Center Theater although I live just 30 blocks from there. So I’m not sure how useful this app will be in even less compact theater locales like Las Vegas and Seattle.
6. At the Booth
I expected this app to offer more than the others I’ve mention because it cost 99 cents and they're all free.  But you don't always get what you think you're paying for. The information on what the shows are about, where they’re playing and when is pretty much the same here as it is on every other app. As the Times story explains both this app and the one supported by TKTS provide regularly updated info on the discounts at the TKTS booths; the only difference seems to be that At the Booth also tells you how long the ticket buying line is. Its additional features include links to recent headlines about the individual shows and lists of restaurants that are nearby them. But this application is slower to load than the others I sampled, it costs money and, to add insult to injury, its annoying ads kept threatening to freeze my iPad.


7. Broadway Music
Although it sounds like a show queen’s wet dream, there are a lot of dry spots in this guide to scores (no pun intended) of Broadway musicals. On the one hand, the information includes a synopsis of each show’s plot, a list of its musical numbers, a history of notable productions including their cast lists, a tally of nominations and awards the show has gotten, a discography of recordings, and suggestions for further readings for the featured shows. On the downside, there’s no music to listen to and the list of the shows featured, which isn't alphabetized, is really idiosyncratic: to pick one example, Xanadu is listed but Spring Awakening, which won that season's Tony, isn’t. So you may want to think twice before spending the 99 cents it costs to buy this one.
8. iBroadway

Making its debut in June, 2010, this was one of the first apps for theater lovers and it, too, supplies all the standard data. I’d have put it higher up on my list but modesty kept me from doing so.  In addition to offering the standard what-where-when info on Broadway and off-Broadway shows, it also links directly to six theater blogs, including this one.

Is there an app that keeps track of the shows you've seen kinda like good reads for books?

I would like an app that will keep track of the shows I have seen. I unfortunately lost all my old playbills. Is there such an app?

What a bummer to lose your old Playbills! I don't think there is an app like the one you're seeking but the website ShowScore may allow you to keep track of the shows you've seen. You can find it at: http://www.show-score.com. You might also consider keeping a spreadsheet of shows you've seen, which is what I do. Good luck.