"Chasing Heaven" Falls a Little Short of its Goal 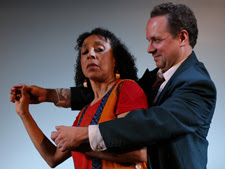 Talent counts in the theater but luck matters too. There are nearly 200 shows in this summer’s
New York International Fringe Festival and the challenge for their creators is to find a way to stand out in the crowd. So it would seem as though the stars have aligned for Leah Maddrie.  For although the program notes say she began working on her play Chasing Heaven five years ago, Maddrie has written and directed a satirical piece that neatly dovetails with the current debate over the new production of Porgy and Bess now playing at A.R.T. in Boston and headed to Broadway at the end of the year.
(You’ve no doubt been following all the brouhaha but if somehow not, click here to read the article that set off the uproar, here to read Stephen Sondheim’s now notorious reprimand and here to see the opinions on both sides that keep pouring in).
Chasing Heaven tells the story of "Chasin’ Hebbin," a controversial 1930s musical that is set in a black community in South Carolina but written by a Jewish Tin Pan Alley composer named Joshua Gerwitz. The show-within-a-show’s hero is Troutbait, whom another character describes as “a blind, one-armed man with a limp who’s in love with a hussy.”  All comparisons to George Gershwin, the crippled Porgy and his beloved Bess are aggressively intended.
The plot pivots around a commission to update Gerwitz's old folk opera so that it will be more palatable to contemporary audiences. The job has been given to Kinshasa Tree Morton, a scholar of African-American and feminist studies who believes that Gerwitz stole the idea for his show from a black writer named Lolly Kibbins, who died in obscurity but has since become an icon for both the black and feminist literati.
A good deal of the fun of watching Chasing Heaven derives from making the connections between the onstage characters and the real-life people who inspired them. Lolly is clearly a stand-in for the Harlem Renaissance writer Zora Neale Hurston. Meanwhile, Morton is a combo of the writers Alice Walker, Maya Angelou (like Angelou, Kinshasa has her own line of greeting cards) and the Pulitzer Prize-winning playwright Suzan-Lori Parks, who, as fortune would have it, is the author of the current Porgy and Bess update.
The play moves back and forth between the ‘30s when Gerwitz is writing Chasin’ Hebbin, the ‘50s at the time of his death and the present. The contemporary scenes call to mind the second act of Lynn Nottage’s recent play By the Way, Meet Vera Stark in which scholars squabble over the legacy of a black actress who was a pioneer in Hollywood (click here to read my thoughts about that one).
There’s a lot of juice to be squeezed from those stories about the images of black people in popular culture and they offer a smart way to examine how we deal—and don’t—with the issue of race in this country.
Chasing Heaven is brimming over with ideas about who has the right to tell certain stories, what responsibility comes with the telling and why we listen to some and not others.  But like Nottage’s play, it has so much to say that it too often forgets to dramatize its thoughts. Maddrie has a game cast but they’re burdened by having to spend more time expositing than acting.
Of course Fringe plays tend to be works in progress. Maddrie’s 70-minute draft shows that she already knows how to write smart and funny. So I hope more work will be done and that Chasing Heaven, which is scheduled for just two more performances, including one at 8:45 tonight, will be given more chances to reach its goal.