"Rent" Needs More of a Renovation 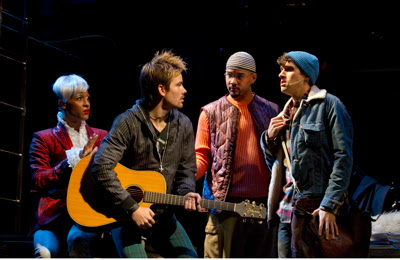 Michael Greif is a master conjurer of new musicals. He helped to create Grey Gardens and Next to Normal. And, of course, he did the original production of Rent.  But I wish he hadn’t directed the revival of Rent that has set up shop for an open-ended run at New World Stages.  For there is both too much and too little that is the same about the old and new Rents. And I’m not just talking about the fact that the lead character Mark now wears a plaid shirt instead of the old trademark striped sweater.

I suppose I understand the impulse not to mess with Rent.  It's a classic beloved by theatergoers and its back story is as dramatic and tragic as its retelling of the opera La Bohème. Jonathan Larson, who wrote Rent’s book, music and lyrics, worked on Rent for nearly eight years but died when his aorta ruptured on the night before the show’s first performance at New York Theatre Workshop in 1996.
But the show went on, selling out at NYTW, winning a Pulitzer and later a Tony and playing on Broadway for 12 years.  Now it’s moved into New World Stages, which has become a kind of Elysian Fields for old shows with nostalgic appeal—the former movie Cineplex is now also home to Avenue Q and Million Dollar Quartet.
Larson set the show in his own neighborhood of the Lower East Side and it captures the moment when gentrification was replacing artists, cheap apartments and AIDS clinics with ad execs, condos and gourmet health food stores. Some critics have said that Rent is now dated because AIDS is no longer a death sentence and the image of starving and crusading artists has lost its allure.

That’s silly. The Normal Heart, which won this year’s Tony for Best Revival, was set in the same time period and deals with similar themes. The real problem with the current production of Rent is Greif’s decision to recreate so much of his original staging.

Like everyone else, I was charmed when I first saw Rent down at NYTW but all these years later fresh thinking from someone like Alex Timbers, who did Bloody Bloody Andrew Jackson and the staged version of The Pee-Wee Herman Show, might have done a better job of capturing the excitement most of us experienced when we saw the original.
Indeed the things that work best in the revival are two performances that put entirely different spins on two of the show’s iconic roles.  Analeigh Ashford, a gifted comedian, is more playful than Idina Menzel was as the bisexual performance artist Maureen. Ashford makes the character simultaneously irritating and irresistible; you understand why her ex-lover Mark and her current one Joanne are both so besotted with her.
MJ Rodriguez is still in college but his performance is just as imaginative. While Wilson Jermaine Heredia won a Tony for portraying the drag queen Angel as a fragile seraph trying to survive in a bruising world, Rodriguez makes the character tougher, edgier but no less endearing.
I wish more of the cast had taken similar risks.  But even so, I’m still glad Rent is back.  I once thought that the show’s initial success was largely due to the sympathy people felt about Larson’s death. But I was wrong. Rent earns its own stripes. It has a wonderful score, filled with glorious songs: real hummable tunes and lyrics that aren’t afraid of metaphors.
“I forgot how much I like these songs,” my sister Joanne leaned over and whispered and then continued to silently sing along. Other people in the audience were more vocal, cheering loudly after each number. I wish Larson were here to hear them—and to write more.

I completely agree with you. I was intrigued when I first saw the cast list awhile back. Especially with Annaleigh, I didn't think she had that certain "edge" but she proved a lot of people wrong :) Also with Adam Chanler-Berat, I have pictured him as Mark for so long now, so I'm thrilled he landed the role!

Love your blog by the way :) Keep up the good work!

Thanks for the kind words, Guilty Dreamer. And I'm glad you enjoyed the show. It's nice to see a new generation of players get a chance to show what they can do—particularly what they can do differently.