"Zarkana" is a Delighful Extravaganza 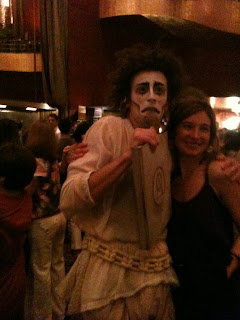 Get there early if you’re going to see Zarkana, the latest Cirque du Soleil production, which recently opened for a summer-long run at Radio City Music Hall. And make sure to take your camera.  For at the performance my sister Joanne, who took the photo on the left, and I attended, male and female clowns all done up in white—not just the usual face make-up, but also ivory-colored costumes and powdered hair—roamed the lobby, silently teasing, flirting and dazzling the audience members waiting to go inside the theater. The result was an air of enchanting weirdness that set just the right mood for the self-proclaimed rock opera that followed.
The Cirque du Soleil folks have been offering up their trademark mix of circus acts, trippy music and eye popping-visuals for the last 27 years, charming audiences around the world but not so much here in The Big Apple. Their holiday-themed show Wintuk limped through its fourth and final season at Madison Square Garden this year (by comparison, seven different Cirque shows are currently thriving in Las Vegas).
Their more recent New York offering Banana Shpeel opened in the spring of 2009 at the Beacon Theatre (where this year’s Tonys were held) and flopped miserably, running barely two months. I remember walking by the theater and seeing clowns in full make-up looking sad as they puffed on cigarettes outside the stage door the day after the reviews came out.
But Guy Laliberté, the founder of the Montreal-based company,  was determined to conquer us Gothamites (click here to read a New York Times article about his quest) and he commissioned  director François Girard to do it. Girard's solution was to write and direct Zarkana.
Girard has not only made critically acclaimed movies like “The Red Violin,” won a Grammy Award and staged operas, but he also created Zed, the Cirque show that has been playing in Tokyo for the last three years. So he knows how to inject the wow factor. In fact, my sister began to sound like a broken record as she kept repeating that word throughout Zarkana's nearly two-and-a-half-hour extravaganza.
Like most Cirque shows, Zarkana has a nominal plot. This one is supposed to be about a magician named Zark who has lost his love and wanders around an eerie theater looking for her and lamenting about her in Europop ballads. 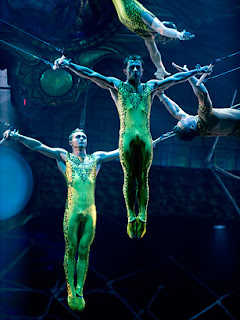 The songs are sung in English but I quickly gave up trying to figure out the lyrics or even to follow the thin story line. Instead, I just sat back and marveled at the succession of acrobats, jugglers, trapeze artists and other daredevils, recruited from Asia, Eastern Europe and Latin America.
I love the idea that in this age, where almost every entertainment option is laden with technological special effects, what makes this show special is the old-fashioned awesome things that people can do with just their bodies and a few simple props like ropes, balls, rings and, in one case, a bowl of sand.
Zarkana isn’t technology-free, however. There are digital projections galore, stunningly choreographed and lit numbers and a giant gizmo called The Wheel of Death (click here to see a trailer of the show).
There are also a couple of pointed references to Spider-Man, including one over-the-audience aerial sequence that seems to be saying “this is what really thrilling flying looks like.” Adding to the insult,  Zarkana cost $50 million, compared to Spidey’s estimated $75 million.
The flying sequences work nicely but the 6,000-seat Radio City Music Hall may be too big for other parts of the show, particularly if you’re sitting up in the nosebleed seats. A few of the acts are quite intimate and you need to be up close to appreciate how truly amazing they are. Some incredible feats drew just scattered applause, and I wondered how that affected the performers who had spent zillions of hours to perfect them.
The critics have split on the show (click here to see how it scored on StageGrade, the site that aggregates the reviews of the major NewYork critics) but Radio City Music Hall was packed the night Joanne and I saw Zarkana and everybody seemed genuinely happy to be there (although a couple of the darker acts did seem to creep out the youngest audience members—I saw at least a couple of dads fleeing with crying tots in tow).
Joanne and I were happy too.  Despite the ubiquity of the Cirque shows, this was our first. And so while the acts may have seemed old-hat to some folks like my blogger pal Chris Caggiano, a longtime Cirque fan who was disappointed in this latest edition, I’m going to have to borrow Joanne’s phrase and say I thought it was just “Wow.”

I'm a huge Cirque fan — go Vegas! — and had a great time at this, too, inscrutable plotline be damned. Beyond the singular aeronautic magic, what always strikes me is the teamwork and trust between those performers. Takes my breath away every time.

That's a wonderfully perceptive observation, Kari. The real magic is the trust those folks share. And that is probably, on some subliminal level, what keeps drawing people back to Cirque shows. For all of us would love to feel that when we totter up high or let go to fly that there will be steady shoulders to stand on or sure hands to reach out and catch us.