"Master Class" Has a Lesson in Grade-A Acting 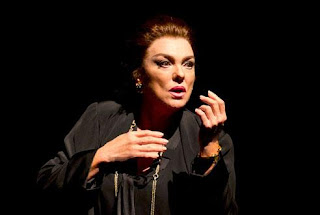 Some of the people in the audience were as attention-worthy as those onstage the night my theatergoing buddy Bill and I saw Master Class, the revival of Terrence McNally’s love letter to the great opera diva Maria Callas that is now playing at Manhattan Theatre Club’s Samuel J. Friedman Theatre.  For in attendance were Zoe Caldwell and Audra McDonald, who both won Tonys for the original 1995 production of Master Class; and opera’s current reigning soprano Renée Fleming, who we assumed was there because, according to the Playbill, she has sung with Garrett Sorenson, a real-life Met Opera tenor who plays one in the show.
McNally based Master Class on a series of classes that Callas taught at Juilliard in the early ‘70s. Critics have always grumbled about the way he tells the story. They say that unlike McNally’s sharp-tongued version, the real Callas was supportive of the students who attended her classes and would never have been catty in public about rivals like Joan Sutherland (“She did her best,” purrs McNally’s Callas).
Yet the play has always been a real crowd pleaser. The original production won the Tony for Best Play and ran 598 performances.  And playing Callas—which includes two dramatic spoken-word arias—is clearly catnip for actresses over 50 (click here to see a photo gallery of the theater divas who have taken on the role).
But I’m guessing that the supporting roles are hard as hell to cast. Callas doesn't sing in the show but the student parts demand theatrical polymaths who can sound authentic as opera singers but who can act convincingly too. The role that won McDonald her second Tony isn’t that big but I think the voters that year were rightly awed that someone could be so compelling in both areas.
This production doesn’t fair as well. Tyne Daly is—no surprise—terrific as Callas.  But Daly seems to ace everything she tries—from her days as the no-nonsense detective Mary Beth Lacey on the old CBS series “Cagney & Lacey” to her take-no-prisoners portrayal of Mama Rose in the 1989 revival of Gypsy.
If you were casting Mother Courage, Daly would have to be at or near the top of your wish list.  But even she had reservations when McNally called her up and suggested that she play his Callas. As she told Playbill, Daly's specialty has always been playing “blue collar” women (click here to read the entire interview).
But Callas wasn’t born with a silver spoon in her mouth. She clawed her way to the top. And, under the direction of Stephen Wadsworth, a stage and opera vet who is also the head of opera studies at Juilliard, Daly’s portrayal reveals both the indomitable woman and the wounded child in Callas. Plus, she also nails all McNally's punchlines and has even managed to capture the exact intonations of the way Callas spoke (click here to listen to recordings of the real master classes that Callas gave).
But Daly’s co-stars don’t give her the same level of support. The play is built around the encounters between Callas and three students who perform for her. Alexandra Silber comes off best because she is able to channel whatever nervousness she may have about making her Broadway debut—or appearing opposite a powerhouse like Daly—into the role of the most timid of the students.
Sorenson isn't as lucky. His character is supposed to go through the biggest transformation under Callas’ tutelage but Sorenson arrives and leaves the same way. He has a lovely voice but while his acting might pass muster on an opera stage, it lacks the nuance and polish we expect on Broadway.
The big disappointment, however, is Sierra Boggess, who takes on McDonald’s old role as a soprano who refuses to buckle under to Callas. Boggess is the perfect stage ingénue and her credits include creating the role of Ariel in The Little Mermaid and playing Christine in both The Phantom of the Opera and its sequel Love Never Dies. But although she has clearly worked hard (click here to read about her preparation for Master Class) Boggess doesn’t wield enough weight—vocally or dramatically—to take on Daly’s Callas. Their showdown seems lopsided, which makes the ending of the play fall a bit flat.
As we walked up Eighth Avenue for a late supper at the restaurant Thalia, Bill and I wondered what Caldwell, McDonald and even Fleming had thought of what we'd all just seen. Both Bill and I thought the original production had been stronger.
But as much as McNally wrote Master Class to honor Callas, his play also celebrates the determination that every artist needs to succeed. Daly is a living—and inspiring—example of that.  And so we were glad to have had the chance to see her in Master Class. And I suspect you will be too if you can grab a ticket before the show’s limited run, which has already been extended twice, ends on Sept. 4.

Thanks for the insightful post. Seeing this on Sunday. I'll let you know if I agree with your assessment.

Robert P, many thanks for all your terrific comments (including the ones on Spider-Man, Sleep No More and Silence!). Eager to hear what you think of this show too. Cheers, jan