RSC's "Romeo and Juliet" is a Modern Romance 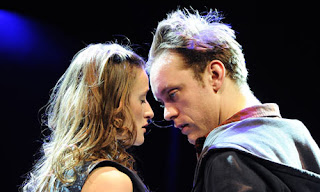 Ever since Joe Papp first set up shop in the East River Park Amphitheater to put on a production of Julius Caesar back in 1956, Shakespeare has been synonymous with summer here in New York City. And that’s never been more so than this year.
At least two dozen productions of the Bard are playing around the city in this month alone.  There's the Public Theater’s All’s Well That Ends Well and Measure for Measure in Central Park and The Drilling Company’s The Comedy of Errors in a downtown municipal parking lot. There’s the Manhattan Shakespeare Project's all-female Henry V and The New York Classical Theatre's version of that same play which includes a boat ride to Governor’s Island. There are three versions of Romeo and Juliet, including one set in the World of Witchcraft; and the weird Macbeth of the Punchdrunk Company's Sleep No More.
And, of course, there are the five plays—As You Like It, Julius Caesar, Lear,  Romeo and Juliet and The Winter’s Tale—that the Royal Shakespeare Company is presenting in repertory at the Park Avenue Armory as part of this summer’s Lincoln Center Festival.
Most of the locally-grown productions are free or for a nominal fee. The top ticket to see the RSC's costs $200 and so I had planned to skip them. But then I got invited to a press preview at which the company showed off the theater it has set up inside the Armory and I fell in love with the space. It’s a replica of the RSC’s home theater back in Stratford-on-Avon, which, in turn, was built to re-create the theaters of Shakespeare’s day—only with modern lighting, air conditioning and seats for the groundlings.
So, I came home, logged on, checked out the reviews that the British critics had written about each of the five productions and decided to see Romeo and Juliet, which, according to the Guardian newspaper’s longtime critic Michael Billington, is the best production of the play in the past 50 years.  Besides, I knew R&J was a favorite of my sister Joanne’s.
The choice seats—both the cheapest and the costliest ones with the best sight lines—were all taken so I settled for ones with a partial view. They cost $90 each.  But that was before the obligatory contribution to Lincoln Center that adds 25% of the ticket price to the final tab.

I grit my teeth and typed in my credit card numbers but I really do hope this practice (a kind of perverse theatrical equivalent of the service-included tip that often dismays Americans when they dine abroad) doesn’t catch on.
I got to the theater early and so managed to nab a seat on one of the benches that have been placed outside the Armory. It’s fun to sit there on a pleasant summer evening and look at the different kinds of people who turn up to see the Brits do the Bard.

A few RSC members also sneak out for a quick smoke before the performance, muttering their lines to themselves as they pace back and forth. The guy puffing on a cigarette next to me looked vaguely familiar but it wasn’t until he’d gone back inside that I realized he was the company’s artistic director Michael Boyd.
As a Tony voter and a member of the Outer Critics Circle, I usually get press seats, which are the best seats in every theater.  But I was on my own dime this time. And, as Joanne and I settled into seats at the far left side of the house, I was reminded that the shows those of us who write about theater see aren’t always exactly the same as “regular” theatergoers get to see. (Click here to read Billington's defense of why critics should get the best seats.)
The Armory audience is seated on three sides of a thrust stage and although Rupert Goold, who directed Romeo and Juliet, keeps the action moving, most of the scenes are played directly out front, a disadvantage for those of us off on the far sides. I’ve read that there were video projections but I couldn't see any. And since the RSC doesn’t use body mics, what I heard of the dialog depended on the actor speaking it.
But Joanne and I were still happy to be there.  Goold’s productions tend to be cerebral, physical and imaginatively theatrical.  He has envisioned Romeo and Juliet as modern-day kids, a bit spoiled, smugly proud of their impetuousness and almost bursting with adolescent hormones. Designer Tom Scutt has dressed them in contemporary clothes—Romeo wears a hoodie and skinny jeans, Juliet, an H&M-style shift and high-top sneakers.
The adults are dressed in Elizabethan wear but they’re not the genteel nobles who usually populate Shakespeare productions. Instead, the feuding Capulets and Montagues look as though they’re heading out to a steam-punk convention or a rave. They act that way too. 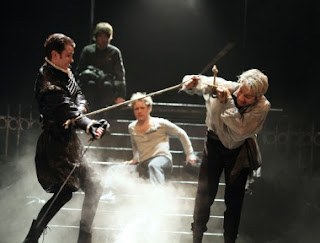 The dances choreographer Georgina Lamb has created for the Capulets’ ball are atavistic, as if to underscore that civilized behavior is a new and tenuous thing for these folks. The swordplay that fight director Terry King has devised looks really dangerous for the actors and the fire that’s constantly being brandished about looks really scary for everyone in the theater.
Much is often made of how Americans don’t know how to speak Shakespeare the way that British actors do. But Goold has allowed his actors to trade the traditional BBC received pronunciation for the various accents, brogues and burrs that reflect the multi-ethnic modern-day England: the nurse has a light West Indian lilt to her voice, Juliet’s dad sounds vaguely Scottish, Mercutio affects a cockneyish attitude.
Mariah Gale’s Juliet has drawn the most critical praise but she played mostly to the front of the house and so I don’t think I got the full impact of her performance. But  Sam Troughton was more generous with his portrayal of Romeo and those of us on the sidelines were able to see and so appreciate more of what he did. He also enunciates beautifully and reminded me, in manner and intensity, of a young Kenneth Branagh.
As usually happens in repertory, the actors take on different roles in the various plays and I liked Troughton so much that I actually considered shelling out more money (including the god-awful “contribution”) to see him as Brutus in Julius Caesar. Unfortunately, Troughton injured his knee while leaping from Juliet’s balcony the day after we saw him.
The performance had to be stopped and an understudy brought in to take over.  Troughton had key hole surgery on his knee two days later.  The folks at Lincoln Center say he’s recovering but it’s unclear whether he’ll be able to get back on stage before the troupe’s six-week run ends in August. But, of course, the shows go on.  And if you can finagle a seat, you should see at least one of them.

this play was amazing!

Broadway, glad you had such a good time and grateful that you took the time to leave a comment here saying so.