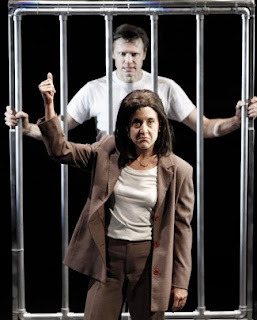 If you like camp, then you’re probably going to love Silence! The Musical, which just opened at Theatre 80 down in the East Village. The audience the night my theatergoing buddy Bill and I saw the show was apparently chocked full of camp fanatics who couldn’t get enough of the show’s exuberantly smutty humor and arch showbiz references.
And there must be a lot of camp followers among New York critics as well because the show has earned an enviable A- on StageGrade, the site that tallies the opinions of the major New York reviewers. My own tolerance for camp is a lot lower than that but even I enjoyed parts of Silence!.
The show, with music by the brothers Jon and Al Kaplan and the book by [title of show] vet Hunter Bell, is an almost scene-for-scene parody of the  movie “The Silence of the Lambs.”  The film, which celebrates its 20th anniversary this year, picked up five Oscars, including Best Picture and nods for Jodie Foster as the young FBI trainee Clarice Starling and Anthony Hopkins as the psychiatrist-turned-serial killer Hannibal Lecter who becomes her mentor when she tries to track down another psychopathic murderer.
Silliness has replaced the movie’s creepiness. And the fun hinges on how the musical will transfer some of the film’s most memorable moments to the stage. Just by chance, Bill had caught “The Silence of the Lambs” on a cable movie channel a few days earlier and so all the references were fresh in his mind but the film itself has become such a camp classic that it’s easy enough to get the allusions.
Silence! got its start as a series of songs that the Kaplans posted on the web. The musical that grew out of the postings debuted at the 2005 New York International Fringe Festival (click here to read a piece on the making of the show) and it shares the smarty-pants sensibility that marks—and often mars—so many Fringe shows.
Poking fun at pop culture, sending up Broadway tropes and being as outrageously vulgar as can be gotten away with were all fresh once. But that was a very long time ago, before Forbidden Broadway went to rehab or Carol Burnett dressed up in a green velvet curtain, complete with gold tassels, to portray Scarlett O’Hara on her old TV variety show.
Today's showmakers need to come up with some new ways to be funny. And there really needs to be a moratorium on spoofing Bob Fosse’s pelvis-forward, finger-popping choreography.
Still, Silence! does have some clever touches. A tap-dancing chorus line of actors dressed as lambs—floppy appendages on their ears and plastic hoofs on their hands—opens the show. And there are a few great sight gags too, including a helicopter ride to a crime scene (hats off to director Christopher Gattelli) and the re-creation of the well where the psychopath Buffalo Bill holds his victims (a round of applause for Scott Pask).
And the cast can’t be beat. Each member of the six-person ensemble is wickedly good in multiple roles. Meanwhile, Jenn Harris is a hoot with her deadpan impersonation of Foster’s Clarice, complete with the southern lisp that Foster adopted for the role (click here to read a Q&A with Harris). And Brent Barrett not only has great fun with Lecter but has a great voice that makes the songs he sings better than they actually are.
Which brings us to the song. You’ve probably heard about the number in the show that uses what we’re now euphemistically calling “the c-word.”  Since “fuck” has lost its potency, popping up in show titles like The Motherf**ker with the Hat and song lyrics like “Fuck you, God” in The Book of Mormon, the word “cunt” is increasing being drafted to provoke a gasp.
The ballad Barrett sings is called “If I Could Smell Her Cunt” and to drive home the point, Gattelli, who also choreographs, has staged a dream ballet in which the dancer playing the Dream Clarice spreads her legs wide in move after move.  It’s funny and offensive at the same time.
But I’m being overly critical.  Silence! The Musical may be a one-trick pony but it performs that trick with a joyful exuberance that’s ideal entertainment for a lazy summer night.  Besides, it’s nice to have an excuse to visit Theatre 80, one of the few family-owned theaters in the city.
One of the Otway sons greeted the audience at the performance Bill and I attended. He thanked us all for coming and joked that his 91 year-old mother was upstairs in the kitchen, lying with her ear to the floor to make sure that everything was running smoothly. I started to worry about what the old lady might overhear but then it struck me that, like the rest of us, she'd no doubt heard it all before.

Saw this the other night and I agree with you for the most part. It was a funny diversion, not especially original. The cast worked hard though and I left feeling fairly satisfied. I think I'd pretty much forgotten about it by the time I was down the street.